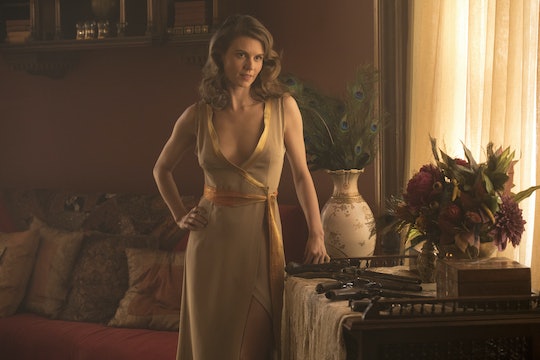 When a new guest named Grace was introduced in "Virtú e Fortuna," Westworld fans could never have guessed that she had a very personal connection to the Man in Black. They shared the same brutal outlook on in-park gameplay, but there were no other details to link them until Grace called William "dad" in the final moments of "The Riddle of the Sphinx." That's right, my friends — Grace is the Man in Black's daughter on Westworld? But now that viewers know this key piece of information, it could mean big things throughout the rest of Season 2.

It was a total accident that Grace ended up in Westworld, because she'd had her sights set on a different adventure in a different park. She had been journeying through the Raj, a park designed to reflect the period in history when Great Britain colonized and controlled India. The official Delos Destinations website described the Raj as a place where you could be pampered at a spa or travel into the jungles and mountains to "glimpse magnificent beasts long vanished from your world." That was why Grace was there, in a way: she wanted to hunt Bengal tigers.

However, it seems as though Dolores' robot rebellion has crossed park borders, because the hosts at the Raj turned on Grace and the other guests around the same time. She escaped with her life, but not before one of the android tigers she sought to hunt tackled her into the reservoir at the edge of the park. It seems like all the parks (there are six in total) share access to the water, because Grace washed up on Westworld's shores not long after. It was quite the coincidence that she'd find herself in the exact same place as her dad.

A strange series of circumstances brought Grace to Westworld, but she used an apparently inherited skill set to get herself out of a few tricky situations. Though the tiger died in the watery voyage from park to park, Grace was almost immediately taken prisoner by the Ghost Nation tribe. She briefly crossed paths with some other familiar human characters (including Delos head of security Ashley Stubbs) but soon orchestrated her escape, riding away from her captors. Since Dolores' murder spree meant there was no getting out of Westworld any time soon, Grace just had to do her best to make it through without ending up in too much danger.

It was kind of convenient that Grace managed to find her way directly into her father's path, but perhaps it wasn't a total accident. She might have known he was in Westworld since their family owns the parks and they both appear to be regular attendees; perhaps when she realized things were going haywire, she decided to seek out her dad to find out what was happening. The Man in Black might be a terrifying human being, but he's not the worst ally to have in a theme park populated by rogue robots.

However, in Season 1 William hinted at having a less than stellar home life, which makes it harder to figure out why Grace would search for him specifically. She might have let fear outweigh her grievances against him, but it certainly seemed like William's house was not a happy one, especially after his wife (and Grace's mother) took her own life. But despite any friction, Williams appears to have passed down his penchant for the parks to his daughter.

Another strange detail was that William said his daughter's name was Emily, yet she seems to be going by Grace. It could be her middle name, or simply a name she uses in the park; perhaps she changed her name to distance herself even further from her father. Any and all questions will hopefully be answered when Episode 5 rolls around, but right now William's relationship with his daughter is still something of a mystery.