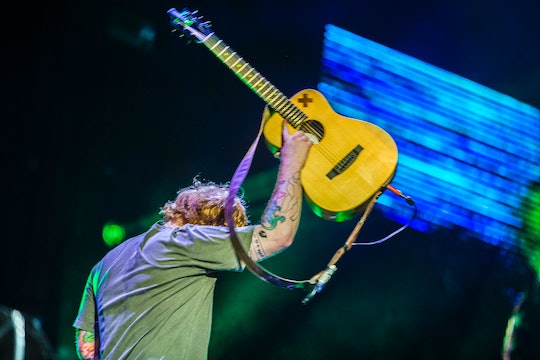 Grammy Nominees' Reactions To The 2016 Nominations Involve Lots Of Gratitude

The biggest night in music may be months away, but the 2016 Grammy nominations were announced Monday morning, and they include some of our favorites — and some surprises. In the Grammys' 58th year, fans are already excited for the performances and acceptance speeches we'll hear when the awards show airs on CBS on Feb. 15. But what about how the nominees reacted to their Grammy nominations? Since they were announced at 8:15 a.m. Eastern, many of the artists nominated didn't immediately tweet their reactions, but some early birds were up and add it (looking at you, Ed Sheeran).

This year's nominees include Kendrick Lamar — with 11, yes, 11 nominations — Taylor Swift, and the Weeknd — both with 7 nominations. None of those are surprising, considering that there were practically dissertations written breaking down To Pimp A Butterfly, Swift is practically taking over the world, and "I Can’t Feel My Face" was everywhere this summer. And in case you were wondering, no, Adele is not up for any Grammys this year. But it is not because 25 is not ah-maz-ing. The New York Daily News explains that the "Hello" singer released her newest album on Nov. 25, but only albums that dropped between Oct. 1, 2014 and Sept. 30, 2015 are eligible for 2016 awards.

Whether they're looking to bring home one or eleven Grammys, the nominees' reactions on Twitter showed that they're aware of what an honor this is:

Sheeran was nominated for Record of the Year and Song of the Year for "Thinking Out Loud."

Legend, with four nominations, will be competing against himself in the Best Rap/Sung Collaboration category ("One Man Can Change The World" and "Glory"), and is up for Best Rap Song and Best Song Written For Visual Media awards.

The "My Favorite Part Of You" singer is up for two Grammys, including a Best Traditional R&B Performance for that track and a Best R&B Album nod for Forever Charlie.

The Voice judge is up for a Best Country Duo/Group Performance for "Lonely Tonight," for which he collaborated with Ashley Monroe.

The Family Guy creator's track "No One Ever Tells You" is nominated in the Best Traditional Pop Vocal Album.

With Charlie Puth, Furious 7 hit "See You Again" has clinched the rapper three nominations, including Best Pop Duo/Group Performance, Best Song Written for Visual Media, and the coveted Song of the Year award.

The "All About That Bass" singer is up for the Best New Artist Grammy.

Along with heavy hitters like the Foo Fighters and Florence + The Machine, the London-based band is in the running for the Best Rock Performance award for "Moaning Lisa Smile."

The band is up for five Grammys, which include Best Rock Performance and Best Rock Song for "Don't Wanna Fight." And for Sound & Color, they are nominated in Album of the Year, Best Alternative Music Album, and Best Engineered Album, Non-Classical categories.