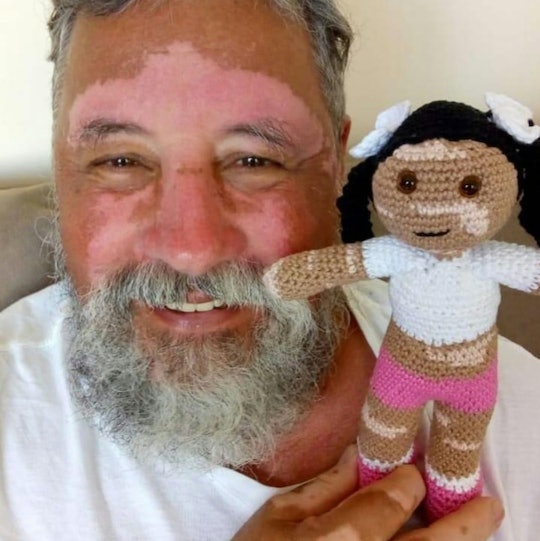 For the millions of kids who live with health conditions or disabilities, a walk down to their local retailer's toy aisle can feel isolating as the majority of children's dolls and toys aren't designed to be totally inclusive. In Brazil, however, one grandpa crochets dolls with vitiligo and other skin conditions or physical impairments like alopecia, baldness, blindness, hearing aids, and wheelchairs in an effort to help all children feel represented and confident. For João Stanganelli Junior, what began as a simple project for his granddaughter has since turned into a thriving post-retirement business.

In an interview translated from Portuguese, Stanganelli tells Romper that he's been crocheting dolls since December 2018. That's when his wife reportedly challenged him to take up crocheting and Stanganelli decided that he'd like to make a doll that looked like him so his granddaughter Isabela might have something to remember him by. Because Stanganelli has vitiligo, a skin condition in which patches of skin lose their pigmentation after pigment-producing cells are destroyed by the body, he crocheted his granddaughter's doll to also have vitiligo patches.

"I decided to make the doll for my granddaughter, and wanted something that she would remember about her grandfather," he tells Romper of his inspiration behind the dolls.

Although Stanganelli initially didn't intend to make dolls for anyone else, he told CTV News that friends and family began sharing photos of the doll he'd made for Isabela. As a result, he began getting requests from people wanting to own their own vitiligo doll. Soon people began asking if he could crochet dolls representative of people with other diseases and conditions like psoriasis, alopecia, or baldness or who used hearing aids, white canes, or wheelchairs.

Stanganelli tells Romper his dolls are meant to be "representative" and give children who may feel different a boost of encouragement and self-esteem.

"Vitiligo can be life-altering," the American Academy of Dermatology notes on its website. "Some people develop low self-esteem. They may no longer want to hang out with friends. They can develop serious depression. Most people have vitiligo for life, so it's important to develop coping strategies."

While Stanganelli told CTV News that he hasn't personally experienced "any inconvenience" since being diagnosed with vitiligo at age 38, he knows that others, especially children, are often teased or made fun of because of it. "The spots I have are beautiful," the news outlet reported Stanganelli, now 64, said. "What hurts me are the flaws in peoples' characters," he continued, referencing to those who bully or tease those who may be different.

Those interested in obtaining one of Stanganelli's crocheted dolls for themselves or a loved one, can reach out to him and his wife about purchasing one through his Facebook page, Amigurumi da Lena.

Kaitlin Kimont contributed to this article.