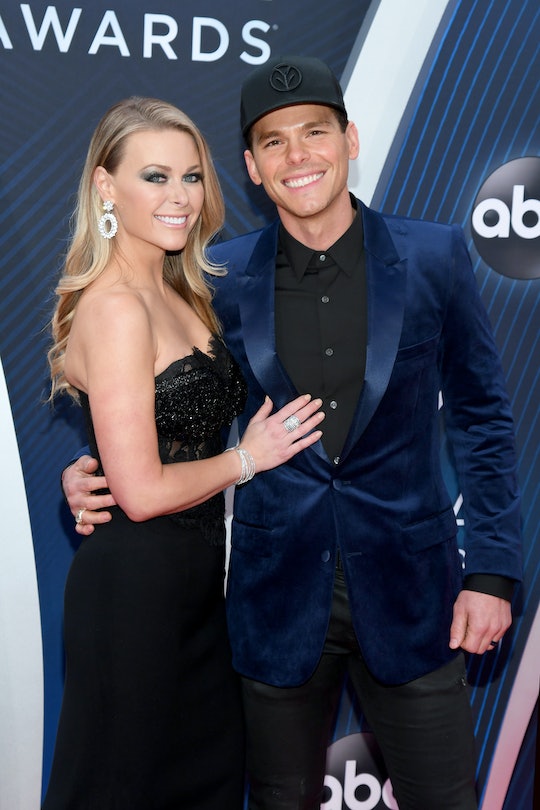 Losing a child is an unimaginable pain, and that grief is all the more complicated when you have other children. Granger and Amber Smith have been grappling with that pain since early June when their 3-year-old son River died in a drowning accident. Since the tragic accident, they've been working to get back into their usual routine. And on Sunday, Granger's wife Amber shared a heartbreaking post after her son's drowning accident, sharing how she's trying to keep things "as normal as possible" for her other two kids.

Following a recent trip to the Field Museum in Chicago, Amber shared an Instagram photo of her children London and Lincoln smiling while standing in front of what she described in her caption as the "biiiiigggggggest T-Rex." The country singer's wife noted that they stopped to see the dinosaur "in honor of River," and they happened upon several "signs" River was with them.

River died in the tragic accident on June 6, according to USA Today, and Amber admitted in her post that it hadn't been easy to get "back into daily life" after her son's death, noting that "Every single thing reminds me of him." She added, however, that even with "this pit in my stomach," she felt she owed it to London and Lincoln to "make life as normal as possible."

"Dumb little things don't matter anymore. My family does. My faith does. We've got this, because God's got us," Amber said in her Instagram caption. "Thank you for all your continued support, prayers and love. It really does help us so much."

Amber used the hashtag "#livelikeriv," a nod to her son's "silly personality and his bright light."

Weeks after the drowning occurred, Amber and the "If the Boot Fits" singer appeared in a lengthy YouTube video in which they recalled the final moments of River's life. Granger recalled having a water gun fight with London and Lincoln, reminding himself that these moments were "not gonna last forever." Within minutes, he and Amber were working together to try and save their son's life.

"I was outside playing with playing with London and the boys were playing a water gun fight," he recalled. "I was looking at London as she was doing gymnastics and I thought, 'Soak up this moment.' I just had this thought because it's not gonna last forever. Somewhere between 30 seconds and 3 minutes, Amber and I are inside the pool gate doing CPR on our son."

Granger urged fans to "love those close to you, soak up those moments, live for today, live in the present, because we're not guaranteed tomorrow."

Earlier this month, Granger confirmed the "unthinkable" news on Twitter and Instagram. "Amber and I made the decision to say our last goodbyes and donate his organs so that other children will be given a second chance at life," Smith wrote on social media at the time. "Our family is devastated and heartbroken, but we take solace in knowing he is with his Heavenly Father."

I can't imagine the pain of losing a child, but I — and many fans — admire the strength and resilience of Granger and Amber in the face of such unspeakable tragedy. Life will never be completely normal for their family again, but they're doing a commendable job of adjusting to their new normal.