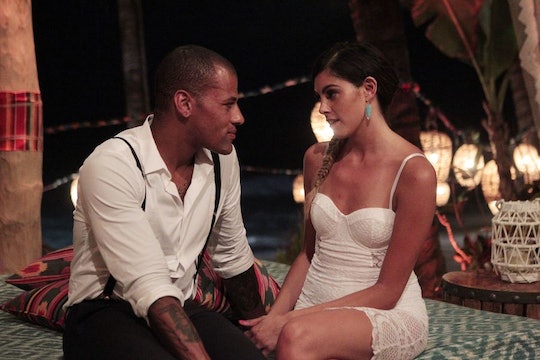 When someone on Bachelor in Paradise says a couple is "strong," it means that they stayed together for...more than two episodes. It's not saying much, then, to say that Grant and Lace are a "strong" couple on the show. On Monday night's episode, however, they took it to the next level: Grant told Lace he loved her on Bachelor in Paradise, and it was pretty cute.

Now, back weeks ago during the premiere, Lace initially did not have her sights set on Grant, but Chad. Thankfully, she quickly saw this grave error when he went on one of his classic Chad rampages. Daniel spoke about the pair to Reality TV World, saying: "I mean they hit it off right off the bat besides, you know, Lace going with Chad at the beginning." When Chris Harrison kicked Chad to the curb, so did Lace. Grant swept in soon after, and they have been together on the show ever since.

Fast forward to Monday's episode: Grant surprised Lace with a massage session. Points for him, but then he proceeded to talk to her during it – lost points, so it's a wash for us. Lace loved it, however, and they took to the hot tub with champagne to continue their date. That's when Grant dropped the "I love you," which means so much in the Bachelor universe. Lace reacted...pretty adorably, actually. She let out a little scream of joy, and they kissed – securing their "strong" relationship.

Lace then asked Grant what exactly he loves about her (which dimmed the magic a bit, but we digress). It seems that they may actually survive this season – so much so that TMZ reported that the pair might currently be engaged. Daniel said about the two, "They both like to have a good time." He pointed out, though, that the relationship is not perfect: "But I think they might also, you know, fight.

Of course, this is Daniel, so we have to take his words with a grain of salt. Even if Grant and Lace, "might also, you know, fight," their relationship could last. Maybe Grant's "I love you" is the beginning of a long, Paradise-filled relationship.