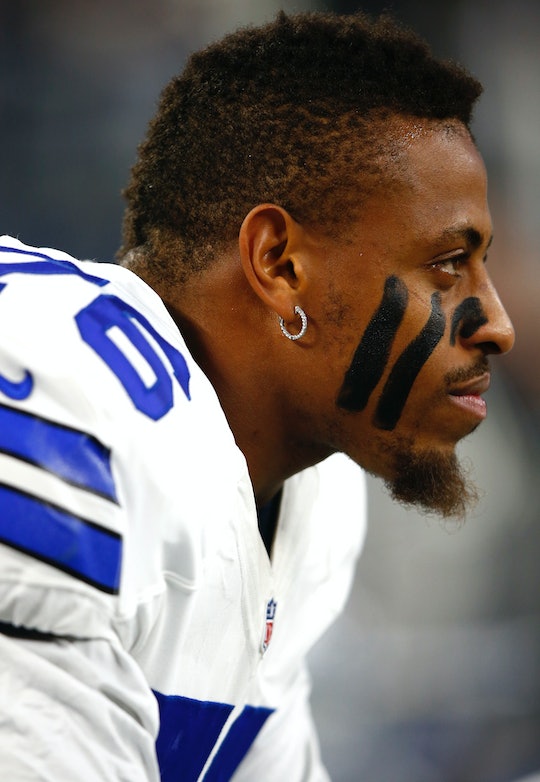 Though his arrest and conviction for domestic violence occurred over a year ago, Dallas Cowboy defensive end Greg Hardy is back in the news for the incident. On Friday, Deadspin released 50 graphic photos of the injuries Greg Hardy’s ex-girlfriend, Nicole Holder, sustained during an alleged altercation on May 13, 2014 in his Charlotte, North Carolina condo. And while it originally appeared as though Hardy would emerge relatively unscathed after his appeal last November, when the charges were dismissed, the disturbing images are once again sparking a conversation about the culture of violence accepted in the NFL.

Along with the photos, Deadspin’s in-depth report provides harrowing new details from Holder about her alleged assault by Hardy. According to the website, a beaten and barefoot Holder claimed Hardy had knocked her into a bathroom wall, thrown her on a futon covered in assault rifles, and choked her. Holder also told authorities, “It doesn’t matter [...] Nothing is going to happen to him anyways.” And up until now, it appeared that way.

Immediately following his 2014 domestic violence conviction, Hardy successfully appealed the case, which led to the charges being dropped. (According to reports, Holder accepted a settlement and refused to testify.) By Nov. 5, The Charlotte Observer reported, the charges had been expunged and removed from his record. Now that photos of Holder's injuries are making the rounds, public interest — and furor — over the case has been reignited.

But Hardy's Cowboys coach Jason Garrett has come to his defense, telling the Star-Telegram that he believes Hardy deserves a “second chance,” because he's contributed to the team, and because he knows — and is being held accountable to — the team’s “expectations and standards.” Garrett continued:

We as an organization, we don’t condone domestic violence[...] We take the issue very, very seriously. We knew when we signed Greg Hardy there would be some criticism that came with that. We laid out expectations for Greg right from the start. We decided that we were going to give him a second chance, but in doing so, the expectations and the standards that we set would be very clear to him -- how he, and really everybody else, is supposed to conduct themselves on the football field and off the football field. And those expectations and those standards are very clear to him.

The Star-Telegram also reports that Jerry Jones, the Cowboys owner, has reiterated some of Garrett’s comments. According to the paper, the owner also said that Hardy deserves a second chance, and that he has a commitment to the team and the organization to do the right thing. Both comments have lit a firestorm across Twitter over the last few days, as many have expressed that Jones and Garrett are only thinking of the game, instead of addressing the pervasive domestic violence issue that clouds the football world.

But while he has Jones and Garrett’s support as of right now, CBS News reports that the defensive end seems to be quickly losing the support of others after pictures of the alleged abuse became public. ESPN’s  Stephen A. Smith is distancing himself from Hardy — someone he initially backed.  “When “I saw those pictures for the first time Friday, I said, 'My God, why is this guy in the NFL?'" he said. A day after the pictures surfaced, Hardy finally broke his silence on Twitter:

Still, even though Hardy has publicly (and hopefully, privately) apologized, it's becoming harder and harder for many to swallow the fact that the NFL is not playing a bigger role in combatting the cycle of violence occurring off the field, and finally holding its players accountable for their actions.