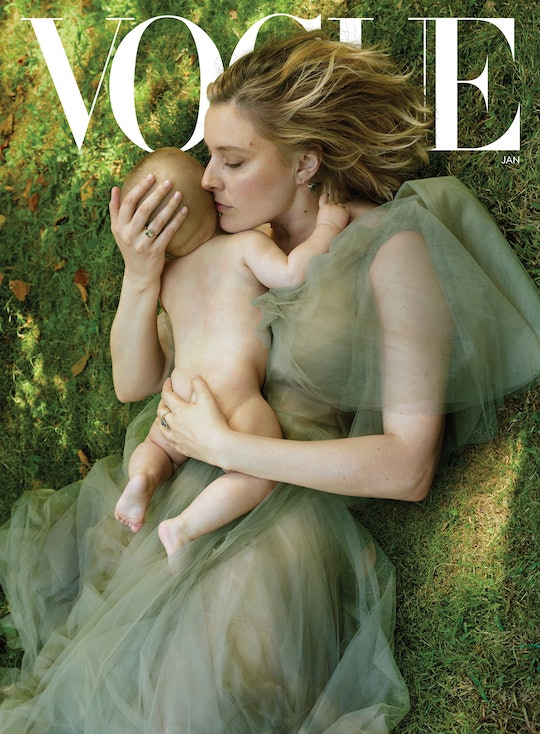 If you're a fan of Lady Bird and excited about the upcoming release of Little Women, then chances are you're also a Greta Gerwig fan. It's also likely that you're incredibly dissatisfied with the lack of information out there about the writer/actress/director's personal life. (Because who doesn't want to know all the things about their favorite stars?) However, during a recent Vogue interview Greta Gerwig shared a first glimpse of her son, and discussed motherhood. And she hit on a couple of universal parenting truths in the process.

As you may or may not know, Gerwig and her partner, filmmaker Noah Baumbach, welcomed their first child earlier this year, according to Time. Not that she made an announcement, or anything. Fans only knew that she had given birth because her representative confirmed the news with Page Six. The privacy surrounding Gerwig's son mirrors that of the privacy surrounding her relationship with Baumbach. She's just a private person.(Which is perfectly her right.)

During an interview for a January 2020 Vogue cover story, however, Gerwig opened up about Little Women, her career, and even a bit about parenthood. Her son's name, for starters, is quite a mouthful: Harold Ralph Gerwig Baumbach. It turns out that news of Harold's birth didn't come too long after it happened. That's because Gerwig submitted her rough cut of Little Women in March — and then her baby boy arrived 24 hours later. “I knew that as soon as I did that, some part of me would relax and then the baby would come,” she told Vogue.

When asked if there was any similarity between bringing a child into the world and a film, Gerwig's sentiments were seriously relatable. “Yes, I think that feeling of forever being underqualified and kind of awed by the thing," she told Vogue. (I'm glad I'm not the only one who feels this way about parenthood.)

Then, when she had to leave the dinner interview abruptly so she could feed her baby, Gerwig declared, "Everything happens in these 90-minute to two-hour increments between feedings." And parents everywhere all shouted, "Amen!"

Gerwig's worries about motherhood while she was still pregnant will likely seem familiar to fellow working moms, too. “I was always scared about being a mother, in terms of what it would mean for what I was able to do,” she told the magazine.

I think you get the point; Greta Gerwig is one relatable mama. She's also seriously talented in the entertainment industry — and shouldn't have fretted for a minute that she wouldn't be able to continue do excel at what she loves. But that's a natural part of motherhood, I suppose: Worrying.

Little Women hits theaters on Christmas Day, by the way. And if the movie is as amazing as the official trailer — which dropped on Aug. 13 — suggests, then fans are in for quite the treat. I, for one, can't wait to see Saoirse Ronan and Timothée Chalamet back together again, alongside Gerwin's amazing writing and directing skills. Is it Christmas yet?

More Like This
Little Black Girls Are In Awe Of Halle Bailey In The Little Mermaid
Exclusive: Watch Hayden Panettiere Talk About Addiction Treatment 4 Months Postpartum
Gabrielle Union Admits She May Be Becoming A Bit Of A Dance Mom With 3-Year-Old Kaavia
10 Parenting Lessons From Abbott Elementary That You'll Want To Write Down