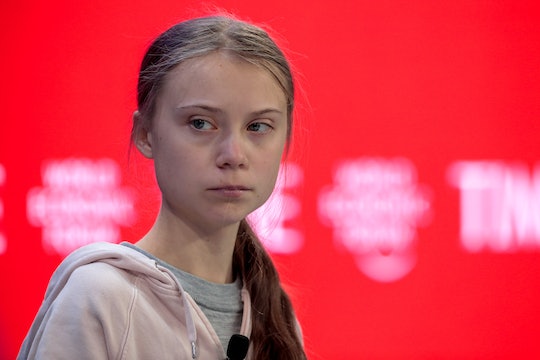 After blasting world leaders for failing to make significant headway toward ending the global climate crisis, Greta Thunberg urged climate change action centered on kids. In a speech that echoed one she'd made last year at the same event, Thunberg warned World Economic Forum attendees Tuesday that time was running out to limit global warming to a rise of 1.5 degrees Celsius. In a call to action, she asked for adults to act on climate change "as if you loved your children above all else."

"I wonder, what will you tell your children was the reason to fail and leave them facing a climate chaos that you knowingly brought upon them?" Thunberg said Tuesday in Davos, according to a transcript of her speech published by The New York Times. Thunberg spoke about inaction on climate change at an event hosted by both the World Economic Forum and The New York Times. "That it seemed so bad for the economy that we decided to resign the idea of securing future living conditions without even trying?"

The 17-year-old accused world leaders of having done nothing but deliver "empty words and promises" in the face of what she called a looming "climate chaos" set to impact her generation. "Our house is still on fire," she said, a reference to one of the most memorable lines in the speech she gave at last year's World Economic Forum. "Your inaction is fueling the flames by the hour. And we are telling you to act as if you loved your children above all else."

Thunberg dismissed goals of lowering carbon emissions and creating a low carbon economy as being insufficient actions. "Our emissions have to stop if we are to have a chance to stay below the 1.5-degree [Celsius global warming] target," she said. "And, until we have the technologies that at scale can put our emissions to minus, then we must forget about net zero. We need real zero."

Instead, she demanded World Economic Forum attendees immediately end all fossil fuel subsidies, completely divest from fossil fuels, and put an immediate halt to all investments in fossil fuel exploration and extraction works,