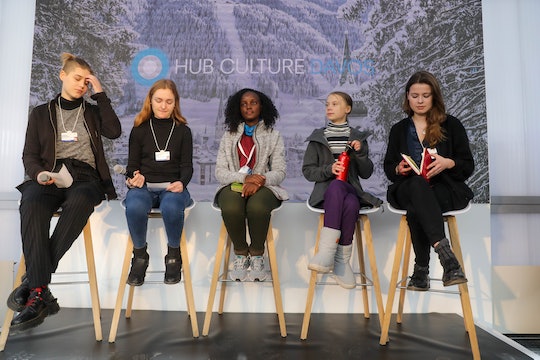 In the wake of the Wold Economic Forum, Swedish climate change activist Greta Thunberg and Ugandan activist Vanessa Nakate have criticized the Associated Press for cropping Nakate, a woman of color, out of a photograph featuring her white peers. While the Associated Press has since apologized, calling the crop a "mistake," Nakate condemned the edit as racist and accused the news outlet of attempting to erase the voices of African activists.

"This is the first time in my life that I understood the definition of the word racism," Nakate said of being cropped from the photo in a video posted to Twitter. "Does that mean that I have no value as an African activist or that the people from Africa don't have any value at all? We don't deserve this. Africa is the least emitter of carbon but we are the most affected by the climate crisis. But you erasing our voices won't change anything. You erasing our stories won't change anything."

At the time the photograph was taken, Nakate, Thunberg, and three other youth climate activists were holding a press conference alongside their Fridays for Future climate change march in Davos, Switzerland. All five climate activists were equal participants in the event. In an article published Friday, however, the Associated Press featured a photograph that had clearly been cropped to cut out Nakate, leaving only her white peers in the frame.

When Nakate called attention to the issue on social media, the Associated Press issued an apology and updated the article to feature a photograph that included Nakate. "We regret publishing a photo this morning that cropped out Ugandan climate activist Vanessa Nakate, the only person of color in the photo," Sally Buzbee, executive editor of the Associated Press, said in a statement released by the news outlet Friday. "As a news organization, we care deeply about accurately representing the world that we cover. We train our journalists to be sensitive to issues of inclusion and omission. We have spoken internally with our journalists and we will learn from this error in judgment."

Buzbee later apologized directly to Nakate on Twitter, telling the young activist, "It was a mistake that we realize silenced your voice and we apologize."

Nakate, who has been raising awareness about climate change and the need for action on the issue in Uganda since 2018, has called on the media to do better when it comes to featuring activists of color. "Activists and people of color need to be respected. PERIOD!" the young activist said on social media. She also pushed back on those who suggested that next time she stand in the middle of her white peers to make it impossible for a news agency to crop her out. "Everyone saying that I should position myself in the middle is wrong!" she wrote. "Does an African activist have to stand in the middle just because of fear of being cropped out?"

On Sunday, Thunberg added her voice to those questioning the Associated Press' decision to crop out Nakate. "This is totally unacceptable in so many ways," Thunberg wrote in an Instagram post addressing the issue and featuring the photos. "Like Vanessa said herself: ‘You didn't just erase a photo. You erased a continent.’"