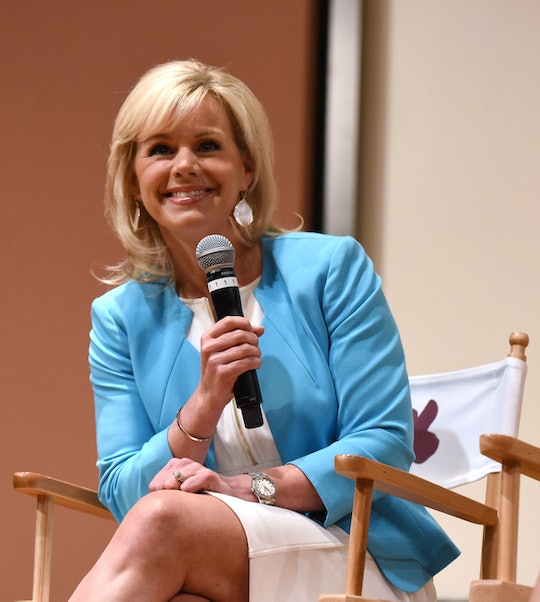 Former Fox News anchor Gretchen Carlson made waves last year when she filed a sexual-harassment lawsuit against Roger Ailes, who was CEO of Fox News at the time. Now that she has become an important face of the movement, Carlson is speaking up about some of the particular challenges faced by victims of harassment. Specifically, in a new op-ed for Time's Motto, Gretchen Carlson says sexual harassment victims are often silenced by arbitration clauses in their work contracts, and something needs to change.

One of the reasons Carlson's case became so public is that Carlson sued Ailes directly, rather than suing Fox News. That meant that she was able to bypass an arbitration clause that otherwise might have limited how public she could go. Arbitration clauses are those pesky little parts of contracts that require employee disputes to go to a third-party arbiter for settling, rather than allowing them to go to court.

Sometimes these clauses are only a few words long, and employees aren't particularly aware that they've agreed to them. And many times, accepting an arbitration clause is a requirement to getting hired, across a wide variety of careers. Arbitration clauses often also specify that employees cannot talk about a dispute publicly, meaning that many victims of sexual harassment who go through third party arbitration can feel very alone. Luckily, that lack of awareness seems to be changing, with growing headlines about sexual harassment issues at companies ranging from Fox News to Uber.

In her op-ed, Carlson noted the change, but pointed out that there was still a long way to go, writing,

And still, so many women are being silenced by employers who force them into a secret star chamber proceeding called arbitration. By coercing women to remain silent about illegal behavior, the employer is able to shield abusers from true accountability and leave them in place to harass again.

The arbitration process — often argued to be a quicker and cheaper method of dispute resolution for employees —instead has silenced millions of women who otherwise may have come forward if they knew they were not alone.

There is a way to address this problem. In the op-ed, Carlson brought up The Arbitration Fairness Act of 2017, a bill introduced by Minnesota Senator Al Franken, which aims to limit the number of people and cases who are forced to settle disputes through arbitration. Carlson urged bipartisan support for the issue.