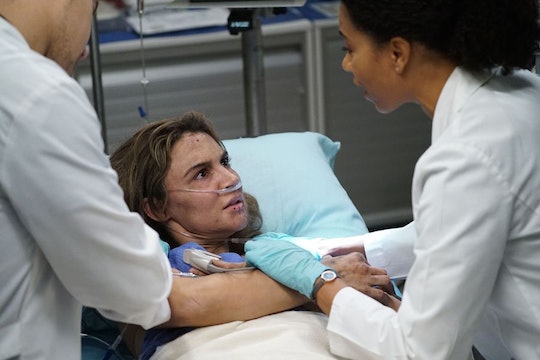 Throughout Grey's Anatomy's 13 seasons, the show has tackled various issues, including shootings, rape, miscarriages, abuse, and everything in-between. While the show has never shied away from also showing the realness of mental illness, Thursday night's episodes reminded viewers why the show continues to be one of the best on television. Grey's Anatomy addressed mental illness in a powerful way that will stick with viewers for some time.

The storyline began with a homeless woman coming into the hospital and talking about how snakes and other things were touching her and trying to grab her. DeLuca and Riggs weren't sure what was going on at first and followed her as she went behind the desk until she collapsed. They later discovered that she had a very outdated pacemaker that needed to be fixed, but otherwise they didn't really know how to figure out who she was since she had no identification.

Thankfully Riggs had the bright idea to look up her pacemaker ID number, which allowed them to get in contact with the woman's parents. After Maggie and Riggs replaced the pacemaker, the woman's mother arrived at the hospital and was shocked to discover that her daughter was alive. Apparently while she was in college, the woman had disappeared. Her apartment door was open and it looked as if there'd been a struggle, leading the mother to believe her daughter had been abducted. Since it'd been years, she'd assumed her daughter was dead and they'd even had a funeral.

It turned out the woman actually had schizophrenia. As was said on the show, schizophrenia, as well as other mental illnesses, tend to develop in early adulthood, typically in a person's late teens or early 20s. Therefore, the woman's parents didn't even realize that their daughter had a mental illness and assumed she'd been abducted and killed.

When the parents were first reintroduced to their daughter, she didn't recognize them. However, by the end of the episode, she came to realize who they were. Thankfully, with the help of medication, schizophrenia can be manageable, but as the Grey's indicated, if left untreated or undetected, mental illness can be detrimental to one's life.

During a commercial break, Kelly McCreary, who plays Maggie, made a PSA about the importance of mental health, and reminded viewers to get help if they, or someone they know, need it.

The episode and PSA resonated with many fans and it's great that Grey's tackled an issue that isn't talked about enough. Hopefully people will continue to have open discussions about mental illnesses and how they can be treated.