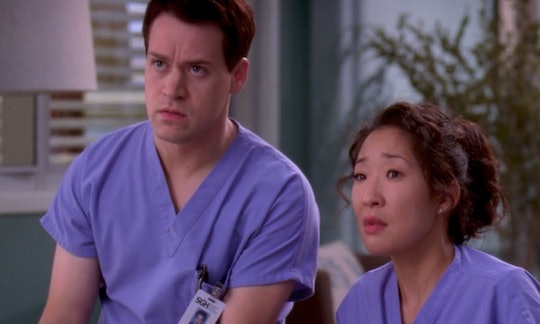 'Grey's Anatomy's 300th Episode Will Be Full Of Familiar Faces

The 300th episode of Grey's Anatomy marks a major milestone for the medical drama. Back when the series first began it was all about a group of five surgical interns: Meredith, Alex, George, Izzie, and Cristina. And while only two of the original group remain on the show, the 300th episode will find an interesting way to revert back to its roots. In fact, according to the promo, Grey's Anatomy will pay homage to Cristina and George in a very unexpected way.

In the preview for the new episode, two patients arrive at Grey Sloan Memorial Hospital and they look very familiar to Alex and Meredith. It appears George and Cristina's doppelgängers will arrive at the hospital, but looking a little worse for wear. The two, along with another, were involved in a roller coaster accident, though it's unclear what exact injuries George and Cristina 2.0 have sustained. But the point is they'll cause a bit of a stir in the hospital and make our beloved surgeons think back to the good old days. Looking at the trailer, even Dr. Bailey and Dr. Webber will be surprised by how much these patients look like their former proteges. And really, I can't say that I blame them.

Though not seen in the preview, Entertainment Weekly has confirmed another patient will also give the doctors serious Izzie Stevens vibes. Izzie hasn't been mentioned much on the show since she left during Season 6, presumably due to the reported fallout actress Katherine Heigel had with show creator Shonda Rhimes. So it'll be interesting to see how she gets mentioned throughout the hour.

"Cristina, George, and Izzie we're thinking about a lot during this episode because our three guest actors on the show actually really look like them and remind the rest of the doctors of those characters," Sarah Drew, who plays April, revealed to EW. "That causes the original group to really remember those people well and want to fight for these ones to live."

Here's hoping fans won't have to watch George die again. (I don't know about you guys, but it's still way too soon for me.) Besides the quasi reunion of the original interns, Ellen Pompeo, who plays Meredith, revealed in the cast interviews for the 300th episode that the segment will pay homage to all the main characters that have been on the show. "We pay homage to every character that's walked through the door. All the cast members that we love and miss," she said.

Those other characters will probably include fan favorites Lexie, Mark, Callie, Addison, and, of course, Derek. Can you really have the 300th episode of Grey's without talking about McDreamy? I don't think so. No matter how Derek is brought up, it'll surely make many fans get emotional. While Cristina and Meredith are arguably the greatest love story the series has told over the past 14 seasons, no one with ever forget "MerDer" and many still aren't over Derek's death. Being reminded of his love with Meredith will be heart-wrenching, but no mention of Derek would be even worse.

Regardless of how the episode plays out, the cast and crew have promised it will be a heartfelt and funny episode that's reminiscent of everything that has allowed Grey's to keep going strong for all these years. So make sure to tune in Thursday for the 300th episode of Grey's Anatomy, which airs at 8 p.m. EST on ABC.