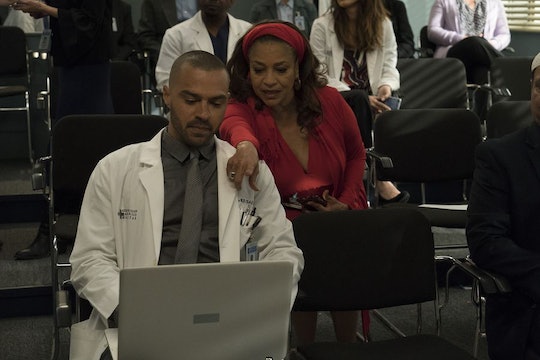 Although the latest Grey's Anatomy was filled with laughs due to a number of people accidentally getting high, the episode also delved into something quite serious. In line with the recent #MeToo and Time's Up movements, Grey's Anatomy tackled sexual harassment in the workplace, forever altering how the show's fictional award, the Harper Avery, will be viewed.

While it was made clear a long time ago that the man the award was named after wasn't a nice guy, Thursday night's episode revealed that Harper Avery wasn't only mean, he was also a repeat sexual harasser. Apparently, the woman Amelia wanted to work with — and who Jackson freed from her nondisclosure agreement, or NDA — was one of Harper's victims. It turns out that Harper had been accused of sexual harassment by 13 different women, all of whom Catherine paid off to remain silent. These women also had to sign an agreement that they could never work at a Harper Avery hospital or win a Harper Avery award.

This fact then tied in with another storyline this season, because one of Harper's victims was Marie Cerone, Ellis Grey's old friend-turned-enemy after Ellis took Marie's name off the submission to get a Harper Avery for their idea. This caused Marie to withhold the patent from Meredith, which Meredith thought she needed for her project for the Grey Sloan innovation contest. But Marie wasn't lying because now Meredith knows her mother did, in fact, keep Marie's name off the project because including her would've meant they couldn't have won.

This episode is only just the beginning of this storyline, since Harper's actions will impact a lot of people now that the news is public, especially because Grey Sloan is a Harper Avery hospital. However, Thursday's episode had a great jumping off point, especially because of Catherine's powerful speech to Jackson explaining why she paid those women off. Though the fight for equality in the workplace is still ongoing, things have also come quite a long way since 30 years ago, something Catherine was quick to point out.

When the sexual harassment allegations against Harper were made, it was during a time when women could easily be fired for making such a claim and it would ruin their reputation. For Catherine, paying these women off was a way to make sure they could walk away from the nightmarish situation with something. She also hoped that if Harper lost enough money, then he would stop his horrific actions, which is what happened. It was clear that Catherine didn't feel good about it and she certainly didn't try to make excuses for Harper. Instead, as she said to Jackson, she did the best she could in a terrible situation.

Now that the cat's out of the bag, the truth about Harper will have a domino effect for everyone at the hospital. For Meredith, she has to not only contend with the fact that Marie was right, but also think about what this all means for her own Harper Avery award. Does she keep it knowing the man it's named after was a sexual harasser? Or does she forgo the award and try to make things right with Marie? And what will happen to the hospital that got a lot of its funding from the Harper Avery foundation? Will the foundation crumble now that the truth is out and the hospital will go broke?

Seeing as how there needs to be a hospital for the show to go on, that seems unlikely, but this Harper situation will definitely have consequences and even if the hospital is still standing, not everyone will make it out of this unscathed.