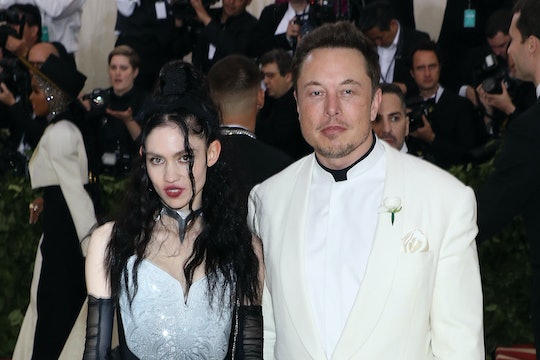 There's now even more questions about X Æ A-12, the name of Grimes and Elon Musk's newborn son. Because of the special characters and number included in the intriguing moniker, the little boy's name might not be accepted on a birth certificate in the state of California.

While Romper's request for comment from Musk and Grimes' representatives regarding reports of their son's name and their residence were not immediately returned, CNN reported that Musk owns property in California, which could mean that's where they're currently residing. TMZ reported that Grimes gave birth in Los Angeles on May 4.

This location, however, could prove to be a little problematic for the new parents as California's naming rules state that only 26 characters of the English alphabet are allowed on birth certificates. "In California, you can only use the '26 characters' of the English language in your baby name," family law attorney David Glass told People. "Thus, you can't have numbers, Roman numerals, accents, umlauts or other symbols or emojis. Although an apostrophe, for a name like 'O'Connor,' is acceptable."

Musk revealed earlier this week that they had named their newborn son X Æ A-12 Musk, which Grimes later confirmed on Twitter. The Canadian singer, whose real name is Claire Boucher, also explained the meaning of the name, stating that "X" stands for "unknown variable." She tweeted that "Æ" is her "elven spelling of Ai (love &/or Artificial intelligence)" and "A-12=precursor to SR-17 (our favorite aircraft). No weapons, no defenses, just speed. Great in battle, but non-violent + (A=Archangel, my favorite song)."

While there is a little more clarity about the meaning of X Æ A-12's name, the jury is still out on how to pronounce it and what exactly is listed on his birth certificate. And if X Æ A-12 is what the new parents submitted for his birth certificate, Glass explained to People that it's likely their request will be "rejected" and they'll have to submit paperwork again.

Politicians have tried to change the rule that might impact X Æ A-12's name. According to The Guardian, California lawmakers tried to pass a bill to allow diacritical marks, such as the ~ (tilde) or ¨ (umlaut), to be included in birth records, but it "stalled out" due to cost. Even names like Nicolás and José fall under this rule, according to KQED. So before you name your own child something like X Æ A-12, you might want to research what you can include on their birth certificate in your state.