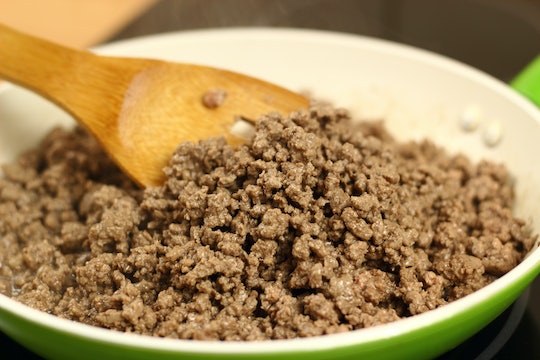 More Than 56 Tons Of Ground Beef Have Been Recalled Due To E. Coli Concerns

Unfortunately for all of the carnivores out there, a new ground beef recall involving more than 56 tons of meat was announced Tuesday via a statement from the United States Department of Agriculture (USDA). Colorado Premium Foods has voluntarily pulled the product due to possible E. Coli contamination, so here's what you need to know.

These past few years haven't been kind to ground beef. In September 2018, 130,000 pounds of ground beef were also recalled due to E. Coli concerns, according to Metro. Then, in April, the U.S. Centers for Disease Control and Prevention (CDC) announced that an E. Coli outbreak had infected 109 individuals in six states.

The USDA hasn't definitively linked Colorado Premium Foods' products to the ongoing outbreak, but it hasn't been ruled out either. "Further traceback and product analysis continues to determine if the recalled products are related to the E. coli O103 outbreak," the USDA's press release noted. Colorado Premium Foods, a Georgia-based company, did not immediately respond to Romper’s request for comment regarding the recall.

So, what do you need to know about this recall? The affected products, exclusively sent to restaurants, were produced on the following dates in 2019, according to USA TODAY:

If you work in the restaurant business or are a concerned diner, don't serve or eat meat from "two 24-lb. vacuum-packed packages" in cardboard boxes containing raw "GROUND BEEF PUCK" with the following "Use Thru" dates, according to Business Insider:

It's also important to note the type of E. Coli involved in this recall, E. coli O103. This strain is a "zoonotic pathogen that is capable of causing hemorrhagic colitis and hemolytic uremic syndrome (HUS) in humans," according to PLOS ONE. In hemorrhagic colitis, "abdominal cramps and diarrhea that may be bloody" are top symptoms, while HUS can lead to the following issues, according to the Mayo Clinic:

Parents should pay especially close attention to these symptoms because HUS is "most common in children under 5 years old," according to the USDA's press release. If you or someone in your family is experiencing any of these symptoms, contact a trusted health professional ASAP.

The affected meat was shipped to distributors in Ft. Orange, Florida. and Norcross, Georgia, so be particularly vigilant if you live in these areas, according to Fortune. It's unclear at this time whether the meat was sent to other areas, but if this recall is linked to the current E. coli outbreak, then it's possible it was shipped elsewhere. At this time, the outbreak involves the following 10 states, according to Knoxville News Sentinel:

At least 156 people have been affected by this outbreak as of Thursday, according to CNBC. So to keep yourself safe during this outbreak, it's probably best to avoid ground beef-based dishes at restaurants for the time being. If you do decide to grab a burger, check with the waitstaff to ensure you're not eating any recalled meat. And if you manage a restaurant, dispose the recalled meat ASAP.

Additionally, follow the CDC and USDA's websites for current updates.