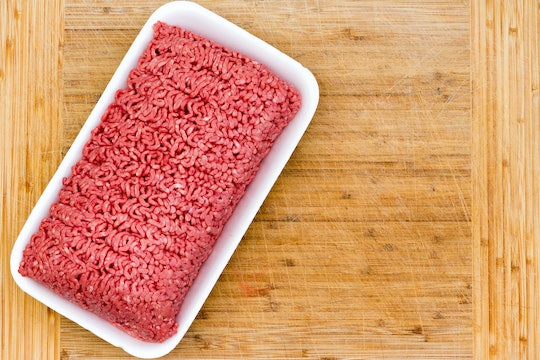 130,000 Pounds Of Ground Beef Recalled Over E. coli Concerns Was Sold At These Popular Stores

Food recalls are always a little frightening to hear about, but fortunately companies and manufacturers are taking steps to resolve any possible health concerns. Most recently, over 130,000 pounds of ground beef has been voluntarily recalled over E. coli concerns, and parents should have an extra close look in their freezers since the possibly contaminated meat has been linked to some popular stores that you might frequent.

Cargill Meat Solutions issued a voluntary recall last week due to the product possibly being contaminated with E. coli, according to a news release from the United States Department of Agriculture (USDA). One week later, on Wednesday, the USDA published a list of popular retailers where the ground beef was sold nationwide, according to Parents, which can be found here.

It's important to note, however, that the recalled ground beef sold at these select stores wasn't sold there recently — it was sold in these stores over the summer, according to the USDA, with a freeze and sell-by date of July 11.

"What we really want consumers to know is that the recalled product will not be found on store shelves as it was produced at one of our facilities in June, with a July 11 expiration date," a representative for Cargill Meat Solutions told Romper. "Instead, we are urging customers to check their freezers as that is where the recalled beef would be found."

The ground beef that's a part of this voluntary recall was produced and packaged on June 21, 2018, and sold in stores shortly after, according to the USA Today.

So, if people purchased ground beef from any of the retailers mentioned recently, they're probably safe. But if you've had ground beef in your freezer for a little while, you'll want to make sure it's not part of this voluntary recall.

So, if there is ground beef in your freezer by the brands Our Certified, Excel, Sterling Silver, Certified Angus Beef, and Silver River Farms, take a closer look at the label, according to the USDA. The ground beef from these brands that is a part of this recall have their own unique case codes, which can be found here, and a freeze by date of July 11.

If you're a more visual person, the FDA has pictures of the box labels from the ground beef (which can be found here) so you can easily compare the label on the beef in your freezer to the labels from the voluntarily recall.

This recall was issued after an investigation "identified 17 illnesses and one death" and determined that the ground beef was the "probable source of the reported illnesses," according to USA Today. Illness associated with E. coli can involve diarrhea or vomiting — and for some, it can be longer and more severe.

"We are working in lock step with the USDA to notify consumers," a representative for Cargill Meat Solutions told Romper. "If there is any doubt, consumers should throw it out."

If anyone has any questions about their frozen ground beef being voluntarily recalled, they can reach Cargill Meat Solutions at 1-844-419-1574. But, as the representative stated, the safest thing to do is to simply throw it away.