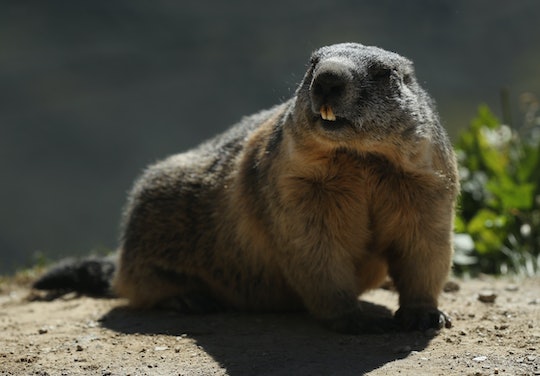 Feb. 2 is Groundhog Day, quite possibly one of America's most stupid traditions (outside of the Electoral College, of course). Just how did this bizarre holiday of superstition and animal harassment come to be? And why do we still do it? The "holiday" is ripe for jokes, and America didn't disappoint, because the Groundhog Day tweets and memes of 2017 are pure gold. Also, 100 percent of them just happen to be about politics, because that subject is suddenly very popular.

Drawing a parallel between the day and the whole Trump situation makes sense when you think about it; the idea that a weird, fuzzy little mammal can somehow control the weather requires a lot of magical thinking and denial of science, and that's something the United States seems to have in abundance as of late. And honestly, I think we've all had enough screaming and crying for a while; most of us could use a good laugh right now. So flip your TV to AMC, which is playing an all-day Groundhog Day marathon, cue up "I Got You Babe" (and maybe set it as your alarm), and strap in for all the jokes the internet could make about a giant hamster.

Honestly, I've been reliving the 9th every day already. I'd love to go back to the 8th, when we all thought Clinton would win.

Yes, making fun of a person's looks is immature. But someone worked very hard on that gif, and it would be really rude not to appreciate their work, so go ahead and loop it a few more times.

This is... not that far-fetched.

To be honest, I'm real tired of people bringing up Bernie at this point, but damned if that isn't the cutest groundhog I've ever seen. Ten points to Hufflepuff.

I mean, to be honest, we all predicted that already, so...

Oh, hi, did you know that the Washington, D.C. city council had a 🔥🔥🔥 Twitter account? Now you do. You're welcome.

OK, now you're starting to bum me out. Can't we still cling to the hope that he probably won't make it the whole four years before getting impeached?

Yes, thank you, this is terrifying and true and it's too early to think about it right now, but nice artwork. Let's end on a high note, shall we?

Classic burn. Hey, at least we don't have to deal with it for 40 years, like Phil Connors did.