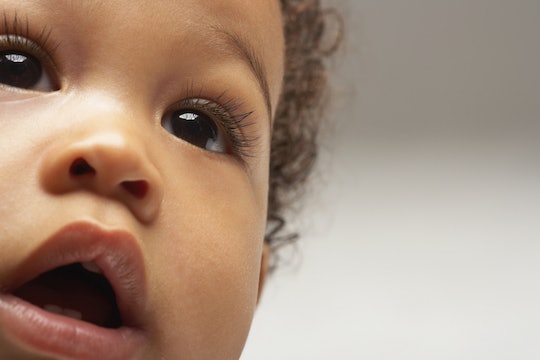 As an adult, there are a lot of benefits to being able to speak more than one language. You can navigate workplaces better, for example, and have a lot more options available for communicating while traveling. You can always learn a new language as an adult, but it's often said they're easier to learn as kids. Now, a new study has also found that growing up in a bilingual home benefits babies in this useful and fascinating way. According to researchers, it really helps improve their attention control.

There's been a lot of studies done to highlight the benefits of raising bilingual kids. A 2015 study in the journal Psychological Science found that bilingual kids have advantages when it comes to social abilities and communication skills. But, how early do these benefits start to show up?

For a York University study published in the journal Developmental Science, researchers worked with infants to track the impact of bilingual environments on selective attention. Half of the infants involved in the study were being raised in homes where they heard one language, while the other infants were raised in homes with two languages spoken, each about half the time, as outlined by EurekAlert!.

Researchers conducted two studies with the infants where they measured their eye movements to assess attention and learning, according to the study's abstract. Researchers assessed each infant 60 times and found some fascinating results.

The first study, as outlined by EurekAlert!, showed infants one of two images in the center of a screen followed by a target appearing one side of the screen. All babies were able to learn the rules of the screen and predict, by using the central image, if a new target would pop up on the right or left hand side of the screen.

The second study began the same way, but researchers switched things up halfway through. They found that babies raised in bilinguals homes were better able to adapt to the change.

In the study's abstract, researcher's wrote these infants were able to, "successfully update their expectations by making more correct anticipatory eye movements to the target and expressing faster reactive eye latencies toward the target in the post‐switch condition."

This helped researchers conclude that the benefits of growing up in a bilingual home can start as early as six months, as noted by EurekAlert!.

Using infants, who cannot speak, helped to prove that growing up in bilingual environments had benefits outside of language itself. Ellen Bialystok, the head of the research team, said, according to EurekAlert!:

This study tells us that from the very earliest stage of development, the networks that are the basis for developing attention are forming differently in infants who are being raised in a bilingual environment. Why is that important? It's because attention is the basis for all cognition.

In addition, the study's results suggest that the cognitive benefits researchers found will last throughout the infants' lives. So, if you're thinking about introducing your baby or future kids to a second language, it may never be too early to start!

Babies may not be able to start chatting back in two languages, but this study makes it clear that the benefits of growing up bilingual start pretty young.

More Like This
The Best Toys For 3-Month-Olds
Should You Swaddle Your Baby In The Summer? Here’s How To Dress Them
How To Breastfeed A Baby With A Cleft Lip Or Cleft Palate
6 Ways To Fix A Shallow Latch So Your Baby Can Nurse Properly