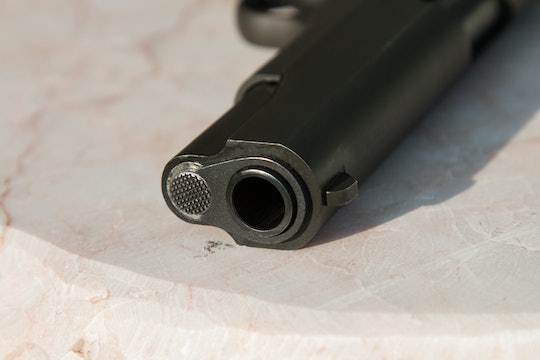 Gun Production Is Increasing & Here's What It Means For Kids

"Guns don't kill people, people kill people" is the age old defense that anyone will use after a tragedy involving gun violence occurs. But in a nation where guns are so prevalent and easy to access, it is hard to believe that it is just the responsibility of the person, rather than the access to the weapon itself that is responsible for the tragedy. Scarily enough, a new study has found that gun production is increasing, with more people purchasing guns for self-defense purposes, making access to guns even more widespread.

A new study published in the American Journal for Preventative Medicine on Thursday found that the production of high-caliber pistols and rifles designed for self-defense has increased in the recent years, according to ABC News, with a significant shift away from the production of firearms used for hunting and recreational use. The study focused significantly on gun industry practices and found some less-than-surprising results — firearm manufacturing has shifted towards the production of more lethal weapons, which in turn, can be observed in consumer purchases of guns. The study found that this increased production of self-defense weapons "may reflect" a societal shift in cultural practices.

But considering the fact that there has been more than 200 mass shootings in the United States in the past year, it is a given that the increased production of guns definitely reflects the state of our country. Guns are killing people, and with weapons becoming more common in households, it doesn't mean the greatest thing for children.

In a nation where more people are shot by toddlers than terrorists, accidents do happen and the statistics involving children and guns are sobering. In 2015, 265 children under the age of 18 accidentally shot themselves or someone else, according to International Business Times. A 2016 study conducted by the Associated Press and USA Today found that gun accidents kill at least one kid every other day in the United States. And just this month, Pew Research Center for Social Trends found that 30 percent of gun owners with children keep their guns accessible and loaded.

The study's lead author, Dr. Michael Siegel told ABC News that the goal of the study was to not take away guns from homes or from people, but to reduce gun violence altogether. "The solution lies in not taking guns away from people who are law-abiding but by being more effective at keeping guns out of the people who are at highest risk of gun violence," Siegel said.

With the production of self defense weapons increasing (and actually using a gun for self defense becoming a rarity), parents need to keep guns fully locked away and make sure they stay in the right hands.