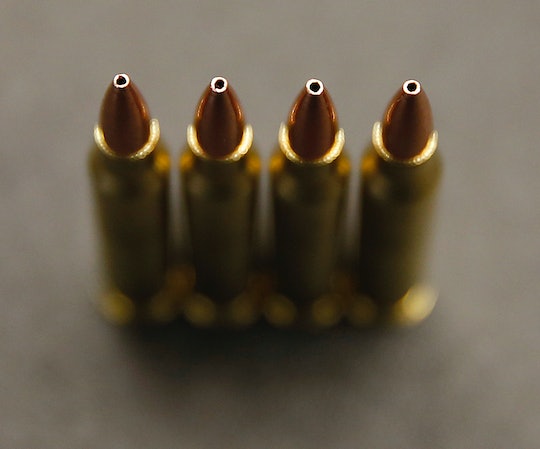 Once again the country is left heartbroken, faced with the reality that Sunday brought the most deadly mass shooting in American history. More than 50 people were shot inside the Pulse nightclub with an AR-15 rifle, the same automatic weapon used in the Newtown, Connecticut, mass murder of school children and the shooting in the Aurora, Colorado, movie theater. Once again, there are renewed calls for a ban on sales of this kind of weapon in the country, and once again gun sales are expected to go up after Orlando, reinforcing the false gun rights argument that the government is coming after America's guns. In reality, even if a ban were passed, the government isn't taking anyone's guns.

The National Rifle Association has found over the years that the pitch that the Obama Administration is going to take everyone's guns away really does a great job of ginning up new gun sales. And that's the lobbying group's job. Scare people into buying more guns. And, though most people are acting entirely out of fear when they buy more weapons rather than the idea that their weapons will be taken, gun sellers are still profiting off of that fear, so why wouldn't it be exploited?

Today's front page of the New York Daily News lays the responsibility of the mass casualties directly at the feet of the NRA with the headline, "NRA's fight to stop assault weapons ban enables killers behind shooting at Orlando nightclub, Newtown, and San Bernardino to use AR-15 rifle." And the accompanying article calls the AR-15 a "mass murderers best friend" and his "enabler a gun lobby that has long opposed efforts to keep assault weapons out of the hands of bloodthristy maniacs."

The NRA president David Keene defended the AR-15 and noted it's useful for all kinds of recreational activities, including target shooting, hunting, and home defense, according to Slate. But aren't there plenty of other guns that could be used for those leisure activities that aren't specifically designed to be human killing machines?

According to the Saint Louis Post-Dispatch, as soon as markets opened following the Orlando shooting, shares of gun manufacturers rose, indicating the market is expecting the predictable bump in gun sales as mass casualties spark another round of calls for common sense gun reform. There doesn't seem to be a middle ground. Completely uncontrolled and unfettered access to weapons designed to kill people quickly is the only position the NRA advocates, and any efforts to curb access of these guns to prevent them from getting into the hands of violent or unstable people is seen as an attack on the Second Amendment.

But what kinds of gun violence prevention measures are actually being proposed? Former Secretary of State and presumptive Democratic nominee Hillary Clinton is calling, once again, for the reinstatement of the assault weapons ban, which was in place from 1994 to 2004, when it expired under huge pressure from the NRA.

The NRA also opposes executive actions from the Obama Administration in January to close the gun show loophole, which exempts private gun dealers from having to do a background check on people they sell firearms to. Clinton and others also support regulations that would prevent people on the terror watch list from legally acquire guns (because yes, those people can legally buy weapons right now, and the NRA opposed terror watch list measures).

But even if all of those things went into effect, it would only apply to future gun sales. The more than 310 million civilian firearms in the country — more guns than actual people — will remain with their owners. There would be no way to confiscate all of these guns, even if the government decided to do so. All of the proposed reforms put restrictions on gun dealers, not gun owners. So why is this a real fear?

The NRA perpetuates the idea that the government wants to take away everyone's guns. And no matter how directly or how hard President Obama pushes back on that idea — one that the president calls a "conspiracy theory" — there are millions of Americans who simply aren't buying it. And we have the NRA to thank for much of that sentiment, as the Daily News pointed out on today's cover.

As for the the NRA's response to the Orlando massacre, all of the group's social media accounts have yet to mention the tragedy.