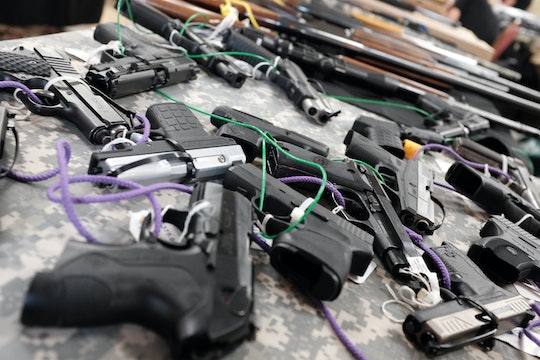 Guns Are One Of The Major Causes Of Death Of U.S. Kids, Study Finds

Guns consistently remain a hot topic within the United States' political sphere. Now, new research points to the need to continue re-analyzing the place of guns within American life. According to a recent study, guns are one of the major causes of death of U.S. kids. They come in second behind car crashes.

In 2018, the Gun Violence Archive, a nonprofit that tracks shootings in the US, has so far reported 334 mass shootings. Mass shootings can be hard to track, because of differing definitions. As noted by Politifact, one definition formerly used by the federal government said four victims had to be killed in order for a shooting to qualify, while other say only four must be injured.

On its methodology page, GVA noted that they use a "purely statistical threshold" to define mass shooting based "only on the numeric value of four or more shot or killed, not including the shooter". Still, using that definition, the United States has averaged about one mass shooting per day in 2018.

Many gun deaths occur outside of mass shootings, though. A Dec. 20 study published in the New England Journal of Medicine looked into the most common causes of death in children and teens within the United States. According to the study, guns rank alarmingly high.

For the report, researchers used data available from the Centers for Disease Control and Prevention database, which compiles death certificates throughout the U.S., as Quartz reported. The study focused on 2016, as that is the most recent year with available data.

They found the top five causes of death for children aged 1 to 19 include, as outlined by Quartz: car crashes, 20 percent; guns, 15.4 percent; cancer, 9.1 percent; suffocation, 7 percent; and drowning, 4.9 percent.

The report noted that 1 in 3 U.S. homes with kids under the age of 18 had a firearm somewhere in the house and in 43 percent of homes, the gun wasn't lock or unloaded. Kids in the United States were found to be 36 times more likely to be killed by a gun than kids in 12 of the other wealthiest countries worldwide, according to Quartz.

"By 2016, death among children and adolescents had become a rare event," the researchers start, noting that declines in deaths from infectious disease or cancer. However, when it comes to injury-related deaths (such as firearms), the researchers went on to say in the New England Journal Of Medicine:

Although injury deaths have traditionally been viewed as 'accidents,' injury-prevention science that evolved during the latter half of the 20th century increasingly shows that such deaths are preventable with evidence-based approaches.

"Children in America are dying or being killed at rates that are shameful," Edward W. Champion, the executive editor of the New England Journal of Medicine, wrote in an editorial published the same day as the study. "The sad fact is that a child or adolescent in the United States is 57 percent more likely to die by the age of 19 years than those in other wealthy nations."

The topic may be uncomfortable to grapple with, but it's important that people are aware of just how much harm is being caused. Gun deaths don't only happen during mass shootings. The numbers are larger and, as the new study shows, impacting kids at higher rates than you might have thought.