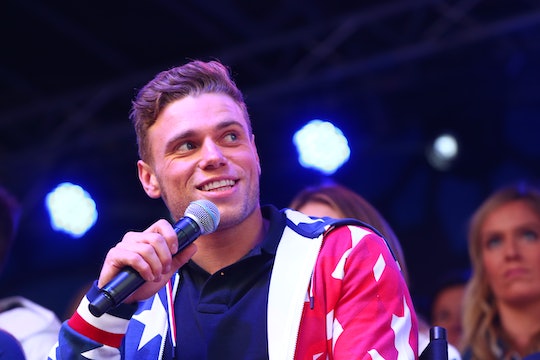 Ever wonder what Olympic athletes do when they're not defying the laws of physics with their extreme physical prowess? I sure do, which is why I like to check them out on all of their social media pages. Perhaps you're wondering particularly about Olympic skier Gus Kenworthy's Snapchat name, so you can catch up on what he does during his down time, and maybe get a feel for what he looks like as a cartoon woodland creature. Luckily, the name for Kenworthy's official Snapchat is just GusKenworthy. So go forth and follow.

For a little background on this pro skier, who you will probably be hearing a lot more about in the next few weeks, Kenworthy was originally born in Chelmsford, Great Britain, though his hometown is Telluride, Colorado (what better place for an Olympic skier?). This is also not his first time representing the good old USA at the Olympics. Kenworthy was also a part of Team USA in 2014 in Sochi, Russia, where he took home the silver medal for slopestyle. Full disclosure — I'm not sure what slopestyle is but I am still very impressed. Kenworthy also has two brothers named Hugh and Nick, and he's been skiing since he learned how to walk.

Honestly, what I want to know is how an Olympic skier spends his time when not sliding down mountains. So for that, I have to take a deep dive into all of his social media accounts. His Instagram is extremely interesting, by the way. Kenworthy's page has lots of modeling shots, some of which feature the athlete in the nude on the slopes. Which just looks extremely cold and not at all pleasant. He looks pretty pleased however. He also appears to have a penchant for sitting on top of very high places. Observe:

Each of these pictures make me want to scream "Get down from there!" like a nervous grandma because that is who I really am at heart. But that is not all there is to learn about Kenworthy. Aside from the fact that I'm a little worried he's going to fall from a great height one of these days, it looks like Kenworthy spends his time having a ton of fun. For instance, like all of us mere mortals, Kenworthy likes to go on sunny tropical vacations with his "bae."

For example, here he is in "Aruba with my aru-bae." I can't even be mad at that pun. It's freakin' cute.

He is also clearly an animal person, and occasionally posts extremely close-up selfies with various pets. Kenworthy snuggles cats and dogs alike, which is nice to see in this tragically divided nation.

Like many athletes, Kenworthy has also been in a few commercials. I particularly like this Head & Shoulders one, which Kenworthy tweeted.

"nothing has made me feel more PRIDE than getting to wave a rainbow flag in a national TV commercial!" he wrote. It's true that being a proudly out gay athlete is not seen very often, and that is a crying shame. A Los Angeles Times story details what went on when Kenworthy came out in 2015. Though he wasn't the first athlete to do so, he was still worried about losing sponsors and losing his fan base. But instead, he found that everyone rallied around him and he actually became more popular. And that is huge.

But all seriousness aside for a second, I think you should all really consider following this guy on all social media platforms. You won't be disappointed, and may even be rewarded with some tasteful partial nudity. You're welcome.