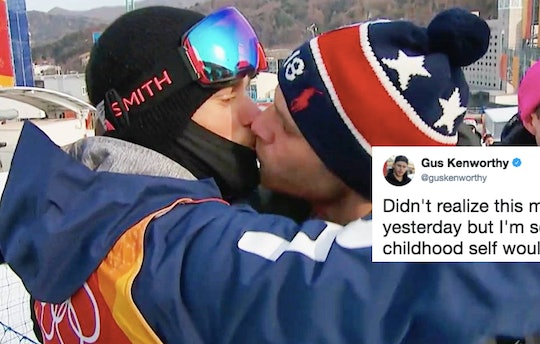 The Olympics are full of heart-stopping, jump-off-your-couch-and-scream -with-joy moments. But perhaps the most meaningful moment at the 2018 Winter Olympics was one that involved no athletic prowess at all — just a simple, history-making kiss between two men in love. Now, Gus Kenworthy's tweet about kissing his boyfriend on TV will have you crying happy tears.

The 26-year-old champion skier competed at PyeongChang on Sunday and, as he got ready to take his first run in the ski slopestyle event, he greeted various friends and family who wanted to wish him luck. One of the well-wishers was Kenworthy's boyfriend, actor Matthew Wilkas, and the two exchanged a sweet, quick kiss as, unbeknownst to them, a camera broadcasting live for NBC sent the moment out to the world. In a way, the kiss was such a small thing, no more than a passing peck on the lips. But in other ways, it's momentous. Even though it's freaking 2018, Kenworthy and figure skater Adam Rippon are the first openly gay American men competing in the Winter Olympics. So, as the kiss began to go viral, Kenworthy recognized its importance in a tweet.

"Didn't realize this moment was being filmed yesterday but I'm so happy that it was," Kenworthy tweeted, with a screenshot of the kiss, continuing, "My childhood self would never have dreamed of seeing a gay kiss on TV at the Olympics but for the first time ever a kid watching at home CAN! Love is love is love."

In some ways, the briefness of the kiss is what makes it so special. It's the kiss of partners who have clearly kissed many times before, and who expect to kiss many times more in the future. It's the kiss of partners in a regular relationship, which is exactly what gay relationships are, even if intolerant and bigoted people try to pretend otherwise. Perhaps there are kids out there, kids who feel something inside themselves that they think they're supposed to hate, who saw that kiss in the midst of all the Olympics coverage, and who will come to a new understanding because of it.

Kenworthy first captured hearts when he competed in the 2014 Sochi Olympics and won a silver medal. Still, the experience was bittersweet, because he was closeted at the time. As Yahoo! Sports reported, that made Sunday's kiss even more meaningful to Kenworthy, who said:

That’s something that I wanted at the last Olympics – to share a kiss with my boyfriend at the bottom — and it was something that I was too scared to do for myself. And so to be able to do that, to give him a kiss, to have that affection broadcasted for the world is incredible. I think that’s the only way to really change perceptions, break down homophobia, break down barriers is through representation. And that’s definitely not something I had as a kid. I definitely didn’t see a gay athlete at the Olympics kissing their boyfriend. And I think if I had, it would’ve made it a lot easier for me.

Kenworthy came out in 2015, in an interview for an ESPN cover story.

Kenworthy's boyfriend Wilkas also had some lovely thoughts on the kiss, telling TIME:

It’s good that it’s televised because it normalizes it more. I would imagine it would be a huge moment for a young gay kid to see an awesome athlete so open and proud of himself and not caring what anyone thinks of his sexuality.

Wilkas also joked that he might have done things a little differently if he had known that the cameras were on them, saying, “That was like a peck — we should have made out in front of people!”

Kenworthy may not have medaled this year but, together, he and Wilkas did something even more wonderful — showed the world that love is love.