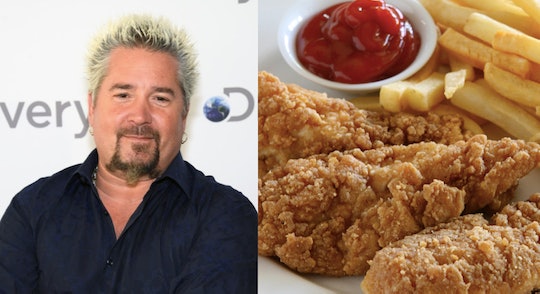 When I was a kid, my dark lord was chicken fingers. Whenever I'd go to a restaurant like Friendly's or the Ground Round (shoutout to all the East Coasters out there who are familiar with this wonderfully bizarre chain), I'd always order the same thing: a plate of chicken fingers with a side of fries. Although I've since moved on from those staples, I admittedly still hold a place in my heart for this kids' menu staple, and my nostalgia is mostly why I'm excited about Food Network star Guy Fieri's new chicken finger restaurant at Disney Springs, aka the shopping and dining complex at Disney World Resort. And as it turns out, a lot of people on social media share my enthusiasm for this delicious new venture.

Fieri's impossibly spiky blonde hair and his penchant for flame shirts makes him an easy target for jokes. Making matters even worse for Fieri is the flak he often receives from fellow celebrity chefs, and some people might remember his long-running feud with the late Anthony Bourdain. But as much as people like to tease Fieri, the truth is he's got a sweet side. Want proof? Look no further than Fieri's response to the deadly wildfires in Northern California that have displaced countless families throughout the past few weeks. Fieri, alongside celebrity chef José Andrés, cooked more than 1,000 meals for emergency responders and affected families, as TODAY reported.

If you want additional evidence of Fieri's decency, you need to check out his new restaurant at Disney Springs called Chicken Guy! (what a name, right?). The eatery — set to open sometime in August — will feature "delicious and juicy tenders that can be paired with more than 20 varieties of house-made sauces" for $8 or less, according to Disney Parks' blog. It's clear Fieri considered families on a budget when he conceived this restaurant, and you got to give the guy props for this selling point.

Oh, and rest assured the restaurant's menu is as equally enticing as its affordability. The press release from Disney Parks' blog went on to boast:

Choose between grilled or fried all-natural chicken tenders with your choice of two signature sauces, or even get a big ol’ chicken sandwich like the Big Bite B.L.A.T. which comes with crispy smoked bacon, lettuce, avocado, tomato, and creamy buttermilk ranch sauce.

The press release went on to note that some of the restaurant's "tasty sides" include "a signature seasoning, Mac Daddy Mac ‘n’ Cheese, and Loaded Fries smothered in SMC (SUPER MELTY CHEESE!)" You can also top the sides with "chopped grilled chicken, bacon, and green onions," according to the press release.

If you're feeling something a little healthier, they've got salads, too. "Chow down on a Chopped Chicken Caesar Salad or a BBQ Chopped Chicken Salad," the press release notes. "There’s also the Southwest Sweet Corn with charred corn, slaw, roasted peppers, black beans, tomatoes, red onions, grilled scallions, and crispy tortilla strips. This one is served with cumin lime mojo and chipotle ranch sauces."

The 8-year-old me is freaking out right now, BTW. So many chicken fingers, so little time.

"So we’re going to disney world in october i just told my mom that there should be a guy fieri chicken place open by the time we get there and shes sooooo excitedddd," someone commented on Twitter.

"I just heard that Guy Fieri is opening Chicken Guy @DisneySprings and I am very excited about that," another person added.

Someone else chimed in:

Ok. There might be a ton of chicken concepts now (reminds of the better burger segment) but we all love some fried chicken, right? Next time I am at Disney, you know where to find me!

And one person shared this amazing meme:

Even if Fieri isn't your favorite celeb chef, I think Chicken Guy! could be a convenient lunch or dinner spot for families visiting Disney Springs. From the eatery's low prices to its wide range of options, it's not difficult to see why people see potential in Fieri's new venture. Chicken fingers forever.