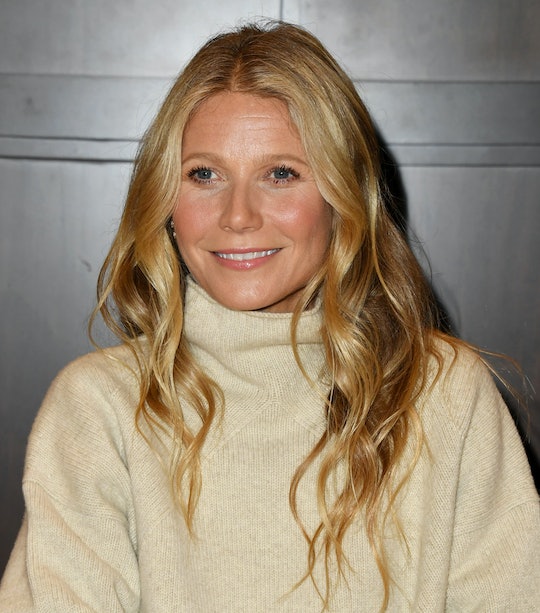 Twitter Has Feelings About Gwyneth Paltrow Bringing Goop To Netflix

Gwyneth Paltrow has her fair share of both fans and critics. Some feel inspired by her lifestyle aesthetic, recipes, products, and more, while others think it's all a little bit much (if not down-right malarkey). So will America's favorite wellness guru be able to inspire joy through clean living? Gwyneth Paltrow has announced a new Netflix docuseries that will focus on her Goop empire and people have feelings about the announcement.

As People reported, the actress has been in major expansion mode with her brand, Goop, which now includes a magazine, a website with recipes, features on wellness and parenting, a dedicated fashion and beauty line, and an upcoming wellness summit in New York.

So it makes sense that Paltrow would want to move her lifestyle brand onto the small screen, with a deal having been inked for a weekly Netflix series beginning in the fall, People noted.

As Variety added, Paltrow's streaming series will be half-hour episodes hosted by the website’s editors, including chief content officer Elise Loehnen and Paltrow herself.

The staff will interview or incorporate experts, doctors, and more to examine different aspects of natural and traditional health, plus issues relating to physical fitness, sexuality, and wellness.

The outlet noted that Goop's magazine will be be put on hold to let the team focus on getting the show ramped up, and that Paltrow has plans to expand her empire to include a book club, a food program, and a standalone beauty podcast. Because a lifestyle mogul's work is never done.

Paltrow is already a New York Times bestseller, as Amazon noted, with The Hollywood Reporter adding she is soon to open her first retail partnership with a hotel, the Rosewood Miramar Beach in Montecito, California. The shop will stock Paltrow's faves for the beach, including swimwear and jewelry.

Paltrow, who has appeared in more than 40 films, Variety noted, will be seen in the including the soon-to-be-released Avengers: Endgame. The newspaper added Goop's podcasts was one of iTunes store’s most-downloaded in 2018.

But many seemed less than enthused about the possibility of a Goop-themed TV show, particularly because some of Goop's previous advice has been extremely controversial in the past, such as when the site advocated for vaginal jade eggs, before later settling a lawsuit related to the health claims made while marketing the egg in its shop.

Some others threatened to cancel their Netflix subscriptions if the show moves forward, though it remains to be seen if anyone will actually go through with that kind of threat. And still others simply voiced their displeasure to Netflix.

While there's no doubt the star is hardworking and ambitious, will the average Netflix binge-watcher find enough common ground with Paltrow's vision, which includes her "G Label" fashion brand in which a basic denim shirtdress costs about $600, and the health advice has included the suggestion to try nothing but goat's milk for eight days, according to The Cut?

Some pointed out on social media that even those who say they dislike what Goop does are likely to watch the show. Which means that, yes, Paltrow and the Goop team probably will find viewers.

While I'm not 100 percent sure the average mom has the bandwidth for Paltrow's dizzying array of offerings (which also include beauty and skincare offerings) the star, who recently married her love, Brad Falchuck in the Hamptons, as People reported, seems to succeed when she goes for something.

So whether she catches people's eye by appealing to a wide variety of Netflix fans, targeting her niche clientele, or frustrating those who aren't Goop fans, Paltrow just may succeed at this new docuseries as well. I really can't wait to see what the series is like and how this all turns out.