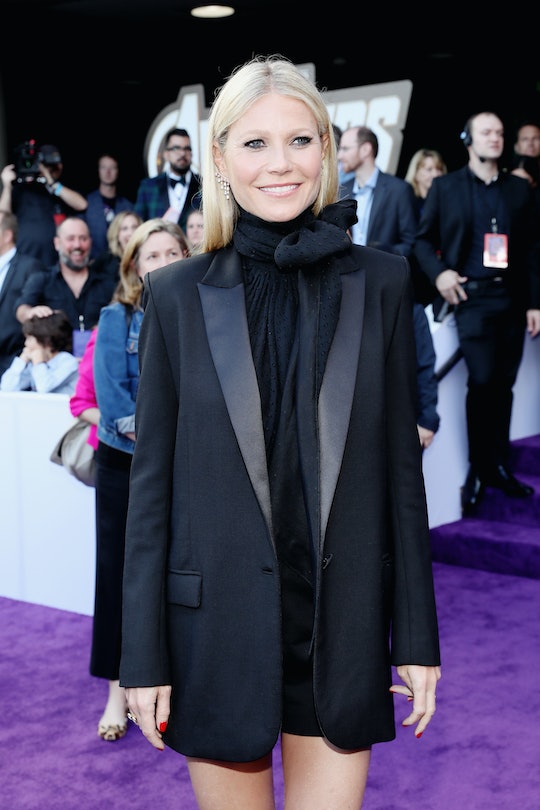 Gwyneth Paltrow & Her Husband Have An *Evolved* Approach To Co-Parenting

She's been called everything from privileged to pioneering, but you've got to admit, few stars do things quite the way Gwyneth Paltrow does. From putting acting on the back burner to expand her wellness company, Goop, to popularizing the term "conscious uncoupling" with a breakup from Chris Martin so fabulous it included a divorce vacation, you can't put this star in one category. Now, news of Paltrow and husband Brad Falchuck's living situation reveals a characteristically evolved approach to co-parenting.

In an interview to London's Sunday Times, Paltrow elaborated on her nontraditional living situation with her new spouse and blended family of four kids between them.

The interview revealed that Paltrow and Falchuck, producer of the hit American Horror Story, only dwell under the same roof four nights a week, as People noted, giving both Falchuck and Paltrow time to themselves in their respective, nearby domiciles the other nights. In other words, time for some actual space.

“Oh, all my married friends say that the way we live sounds ideal and we shouldn’t change a thing,” Paltrow, 46, told the Times, as People outlined, with Refinery 29 reporting the lifestyle pro's domestic arrangement has been approved by her "intimacy teacher," sex expert Michaela Boehm, on the premise that being separate at times adds “polarity” to the relationship.

Hmm. While a Twitter user here or there was prone to outrage based on this — "Why get married if you don't want to be, ya know, married?" wrote one observer, while another noted Paltrow's issues are "rich people problems" — I might be with Paltrow on this one.

Even as an observer who hasn't always felt her vibe in the past, I like the way Paltrow is determined to live "Part Two" of her life on her own terms, whether or not it's deemed unconventional to others.

While having your own address within a successful partnership has long been an idea — Early French feminist Simone De Beauvoir famously maintained a 51-year relationship with writer Jean-Paul Sartre without the two leaving separate apartments, as the Guardian recalled — Paltrow has made it clear there's a method to her domestic madness.

"I've never been a stepmother before. I don't know how to do it," she told the Wall Street Journal last winter, just months after she and Falchuck tied the knot in a gorgeous ceremony. "With teenage kids, you've got to tread lightly," she said. "It's pretty intense, the teenage thing."

Besides Paltrow and her hubby still getting a couple nights away from each other each week to focus on their own needs, whether it's work, parenting or whatever, the dual-residence thing is clearly a way to not shove her kids — Apple, 15, and Moses, 13, and Falchuck's two, Isabella and Brody — into a forced "happily ever after, meet your new family" situation.

And it's not like the two families aren't starting to merge, with joint vacations reported (even including her ex Chris Martin, People noted, with the mag adding Paltrow is close with Martin's new girlfriend, Dakota Johnson).

“I do think, though, at the end of the day, everyone wants the same thing, which is to feel love and be accepted," Us Weekly noted Paltrow as explaining. "My stepson, for example, he had a rough beginning with it all, but now he and I have our own space together. I’m not his mother, he’s not my son, but he knows he is very special to me.”

My bet is that this couple's plan is to move in fully together eventually... but in the meantime, what's the point of being a hater?

Paltrow's open family (she also said in the same interview that Falchuck and Martin are totally buds) may not be for everyone. And some will be bitter that she can afford multiple homes. But her family looks happy. Whatever Paltrow is doing seems to be working. My version of her life is going to be simpler — grab that Groupon I've been eyeing for a night away — but the point here is it's OK for each parent to need space.