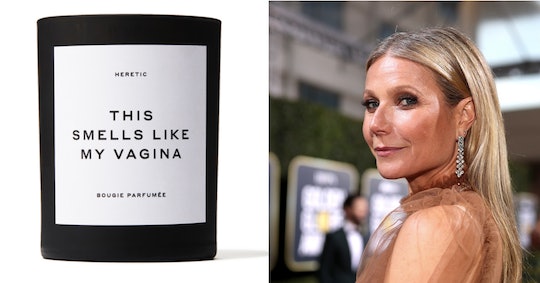 If you would have told me that one of my first Google searches of the new decade would be "vagina candle," I probably would have laughed in your face. But what can I say? This is GOOP's world and we're all just living in it. That's right, Gwyneth Paltrow's company has a vagina-scented candle and it's already sold out. Apparently, so many people were eager to get their hands on the scent that it flew off shelves. What a time to be alive.

The now-infamous candle, aptly named "This Candle Smells Like My Vagina," isn't actually intended to smell like Paltrow's lady bits. Instead, it was created with award-winning perfumer Douglas Litte, and is meant to smell like a blend of delicious things that have a lot more in common with other candles you've smelled than they do with your OB-GYN's office. On the product website, Paltrow described the creation process with Litte as: “We sit on the floor and geek out on fragrance. It’s an amazing process — he’s just so talented." No mention of, well, sniffing one another and I'll leave the visual at that.

But if it doesn't actually smell like vagina, what does the candle smell like? It's described as having hints of of geranium, citrusy bergamot, cedar, damask rose, and ambrette seed blend, which sounds like pretty standard candle stuff to me. A vagina, on the other hand, smells like vagina; which is completely normal and nothing to be ashamed of, but not exactly your run-of-the-mill french vanilla candle.

As can be expected, folks on Twitter had a bit of a field day over the news of the "funny, gorgeous, sexy, and beautifully unexpected" candle, as GOOP describes it.

Along with the fact that the candle sold out, Twitter was a bit shocked that people were willing to pay $75 — or £58 — to get their hands on it.

"I cannot believe. I CANNOT BELIEVE I C A N N O T B E L I E V E that some of you out there spent $75 on a f*cking candle that smells like Gwyneth Paltrow's vagina this g*ddamn candle IS SOLD OUT all of you need a time out you're all fired JAIL TIME TIME FOR JAIL," one person tweeted.

"Gwyneth Paltrow defends charging £58 for a vagina-scented candle, as making each one is very labia-intensive," another joked.

There was some speculation about the shape of the candle as well, but I am happy to report that it is candle-shaped, y'all. Just candle-shaped. "But do the vagina candles actually look like a vagina?" one pondered. Hehe.

The smell was definitely still a mystery, though. "The thing about the goop candle that annoys me most is that it almost definitely doesn't smell like vaginas," one tweet reads. "Not one single vulva smells like f*cking geraniums."

Overall, the candles made from some quality comedy online this week, and for that I am grateful. "So what, Gwyneth?," joked one user. "Most of the candles in my house smell like MY vagina. Admittedly they didn't when I bought them."

"The problem with vagina candles is a lot of men will have trouble finding the wick," one more quipped.

"My friends and colleagues should be very grateful that the candles that smell like Gwyneth’s vagina are sold out because they’re my new go-to gift," wrote yet another, adding, "Is there a vagina emoji btw?"

More Like This
Quinta Brunson Got A Sweet Card From A Kid On Abbott Elementary After Her Emmy Win
Quinta Brunson Had To Give Her Emmy Speech With Jimmy Kimmel At Her Feet
'Squid Game' Is Coming Back For Season 2 On Netflix: Here’s What Parents Need To Know
Chrissy Teigen Says Her Pregnancy Cravings Are "Comical At This Point"