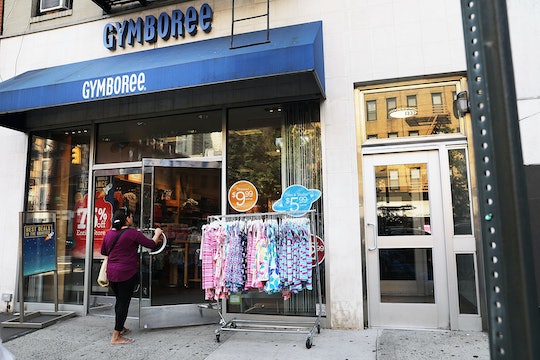 Gymboree's Current Sale Includes 50% Off *Everything,* So Get To Shopping

The internet has been all abuzz over the bankruptcy news of Gymboree, Gymboree Outlets, and Crazy 8 stores. It's like Toys "R" Us all over again, and we're all stuck between excitement over discounts and a general feeling of malaise over the closing of yet more brick and mortar kids' shops. But the end is nigh, and the Gymboree closing sales are starting — even if that's not what Gymboree is calling them.

More Like This
The 7 Best Water Tables For Your Little Ones
15 Face Masks For Kids That Are Cute, Comfortable, & Get The Job Done
Help Dad Celebrate His First Father's Day With These Gifts
These Are The Best Online Meats & Charcuterie You Can Get For Father's Day

In a message on the Gymboree website, CEO Shaz Khang wrote that when she took the helm of Gymboree in November 2018, the store was already in dire financial straits, and it was their decision to close all Gymboree stores, Gymboree Outlets, and Crazy 8 stores, as well as their online shops. Their plan is to continue to maintain their Janie and Jack stores by selling the brand, but what about the going-out-of-business sales? As of right now, none of the clothing sales on their website are listed as "going out of business," even though that's pretty much what they are. The current Gymboree sale is fairly good right out of the gate, with 50 percent off all items, including those already marked down for the season. It's clear they weren't certain of their future until recently, because there is a ton of merchandise available, much of which is highly seasonal.

Right now, economy shipping is free on all orders, and Gymboree is still accepting gift cards on their website. However, they are no longer accepting checks. And all sales — both in store and online — are final. If you bought an item in the store before Jan. 18, you have 14 days from the purchase date to return it, provided you have the original receipt. This is likely going to frustrate shoppers who purchased items for Christmas and were expecting Gymboree to have the generous post-Christmas return policy they've always had.

And if history has taught us anything, it's that the moment they stop taking returns, gift cards are not far behind. Use them immediately. According to Gymboree's press release, "The Company has sought authorization from the Court to continue to honor customer gift cards for 30 days." You should also keep in mind that as the Gymboree closing sales progress and the discounts get deeper, sizes will sell out and you might not get what you want. So far, everything looks pretty well-stocked, both online and in my local shop. Just this past week, I was able to get some really cute jeggings for my daughter.

This closing feels like a gut punch. My son's coming-home-from-the-hospital outfit was from Crazy 8, and my daughter's was from Gymboree. Both of them have been garbed in so much of their clothing that it's tough to see it close. Alas, that is the nature of the retail beast. When I was growing up, I used to live for Kids "R" Us, and one day, somewhere early in my elementary school years, I remember the ache of seeing my beloved store shutter. I imagine this will see my daughter similarly affected.

It's become harder and harder for brick and mortar clothing stores to keep up when giants like Amazon and Target dominate with convenience and simplicity. It's just easier for us to go get everything we need all at once from a place like Walmart than it is to hit up the grocery store, the mall, and the toy store. But all of that convenience comes at a price, and this time the cost is being met out on the backs of those at Gymboree. It's the circle of retail life, and even though it's hard, we would all be foolish to not take the savings where we can.