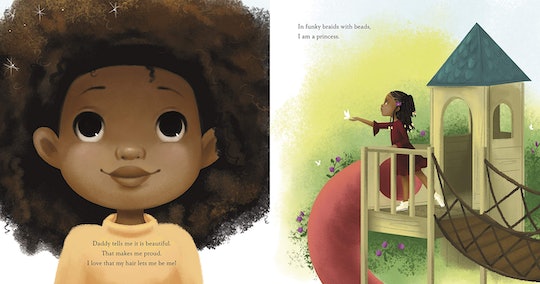 The Children's Book The Internet Demanded

Enthusiasm for Matthew A. Cherry's short film Hair Love has been electric since the NFL wide receiver first announced the project in 2017 — the project raised more money than any other short film on Kickstarter to date. The tale of daddy-daughter love recently found a home for the big screen at Sony, set to be released sometime this year. But enthusiasts can get a first look at the story through the Hair Love picture book (Kokila/Penguin Random House), coming to a bookshelf near you on May 14.

Hair Love stars Zuri, a young black girl who loves her hair "that kinks, coils, and curls every which way." On the day readers meet her, she needs her hair to look particularly good for a mysterious special occasion, but her mom, who usually styles her hair, isn't there to do it for her. Zuri tries to wrangle her hair herself, but her dad finds her, stepping in to fill mom's shoes. Readers watch the pair figure out how to give Zuri the hairstyle of her dreams together, and their close bond shines through on every page.

The inspiration for the short came from "viral videos of black fathers interacting with their sons and daughters online," as Cherry wrote on the Kickstarter campaign for the project, explaining that these videos go against the trope of the absent black father that pervades much of popular media. This narrative has its roots in myth more than fact; a study by the CDC from 2013 found that "black fathers are more likely than their white and Hispanic counterparts to feed, eat with, bathe, diaper, dress, play with, and read to their children on a daily basis" as Vox writer German Lopez explained previously, but media representations do not typically depict these dads' high level of involvement.

Hair Love gives us a dad to love while celebrating black women's natural hair, which has been culturally suppressed since the days of colonization. As Bustle senior editor Kayla Greaves has reported, shaming black women for their natural hair and instituting a "hair texture hierarchy" was a tool of oppression used by slave owners. Dr. Afiya Mbilishaka, an assistant professor of psychology at the University of the District of Columbia, told Greaves, "4C hair was actually used as more of an art form," in pre-colonial Africa. "Our hair is the highest point on our entire body, and therefore considered most connected to the divine."

The book is then both ordinary — a beautiful story about a girl and her dad — and part of the movement to reclaim natural hair and reject a racist ideology. Cherry honors Zuri's curls on every page. The illustrations in the book showcase at least 10 different ways Zuri can wear her hair ("I love that my hair lets me be me!" she tells us on the first page).

Enthusiasm for Zuri's story reached a peak when news of the Sony deal broke. Industry voices, like director Ava DuVernay, along with fans of Cherry, voiced their support on Twitter. "Very proud to see a film that celebrates the father-daughter relationship!" wrote user Jackie O.

The response on Twitter shows how hungry audiences are for a story like Hair Love. That the picture-book adaptation will launch on Kokila ("KO-ki-la"), Penguin Random House's new imprint intent on "centering stories from the margins," makes it all the sweeter.

Between Zuri and her dad, there's a lot to love.