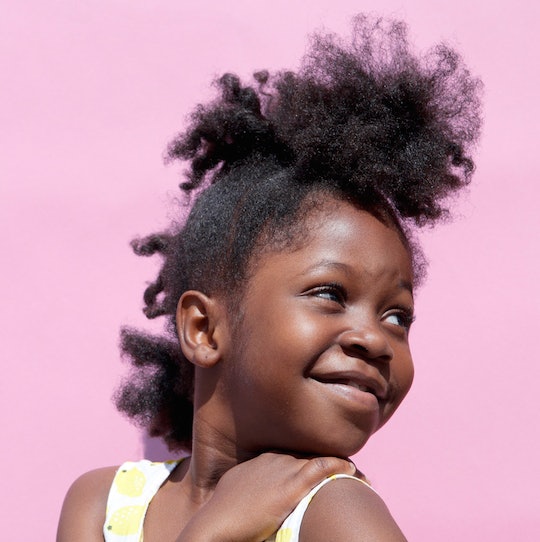 In Into the Woods, the character of The Witch drops this fabulous truth bomb: Careful the things you say/ children will listen/ Careful the things you do/ Children will see/ And learn. Like the rest of us, children are inundated with idealized, specific beauty standards that, at times, seem compulsory every damn day. British photographer Emily Stein's photo series "Hairdo" seeks to use the power of images for good by depicting and celebrating the brilliant variety of black children's natural hair. Because It would be comforting to think that because they are so young, they don't internalize all this nonsense, but that's just wishful thinking: Kids learn at a painfully young age what it means to be conventionally beautiful, and that the most love goes to the people who most closely adhere.

Stein, who is known for her honest and fun photographs of children and teens, was inspired to shoot "Hairdo" after noticing how her neighbor's children wore their hair, and told Romper she wanted to "celebrate the abundance of creativity of hairstyles of kids with afro hair." She then turned her attention to other black children of West Indian and African descent in her neighborhood and photographed them, encouraging them to move around freely and be themselves. In an interview with The Daily News, Stein says, "The purpose of the project was to celebrate charismatic kids with equally charismatic hairstyles. Children are bombarded by images on social media and this syncs into their psyche."

She is not wrong. Studies have shown that children as young as five are swayed by the beauty standards they see depicted on television. Black women and girls in particular are susceptible to the European beauty standards that overwhelmingly dominate Western media. Of course, it's not only women and girls who have to endure white beauty standards; Malcolm X famously wrote of his experiences attempting to transform his hair from its natural texture to straight. So even though it's been said many times and many ways, it bears mentioning at least once more that representation matters—a lot. So it's a breath of fresh air to see these completely genuine, lovely images getting so much attention.

The very important issue of representation aside, her subjects are absolutely adorable and their hair is on point. The series follows in the steps of her previous work, including Saturday's Mosh and Girl's Camp in its unpretentious depiction of children being children. You can see the entire series here, but I've included some of my personal favorites below.

This child simply exudes Blue Steel from every pore.

I am mesmerized by the whimsy that has clearly and magically been entwined in her hair.

My brother tried this look sometime in the early '90s. He did not pull it off at all, much less as expertly or suavely as this kid here.

This girl is everything. She is sunshine in human form.

More Like This
17 Best Potty Training Products For Toddlers
From Captions To Gifts, These Are All The Kindergarten Graduation Ideas You Need
Here’s What You Need To Know About That Viral 1960s Baby Formula “Recipe”
13 Cute Summer Nail Designs To Make A Splash