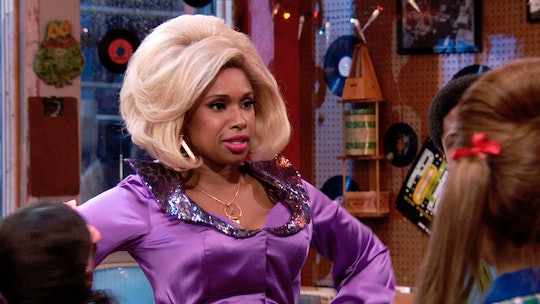 'Hairspray Live!‘s “I Know Where I’ve Been” Is The Antidote For The Pain Of 2016

Hairspray Live! was definitely a fun musical that had fans singing and dancing along, but it also dealt with real issues that have been a big topic of discussion this past year. Hearing Jennifer Hudson sing "I Know Where I've Been" in Hairspray Live! was the antidote for the pain of 2016. The popular song that was first heard in the original musical and then again in the 2007 film when Queen Latifah sang it, holds a lot of meaning to fans this year.

In the past year, the U.S. has been divided on multiple fronts from the police brutality to the Black Lives Matter movement to the election to immigration to everything in between. Fans felt Hudson's rendition of "I Know Where I've Been" wasn't just about the 1960s segregation in Baltimore, but rather about the ongoing divisiveness that's going on in America today. Fans even made a comparison between the protestors in Hairspray Live! to the multiple protests they've seen this year, most recently the ones happening outside of Trump Tower after Donald Trump became President-elect.

Hairspray has always dealt with issues of race and Harvey Fierstein, who originated the role of Edna in the original Broadway musical, told OUT magazine how the racial sensitivity of the project could even be felt back in the early 2000s when it wasn't as much of a hot button topic as it is today.

"Those kids [actors] in 2000, we had to educate them about segregation," Fierstein said in the interview, adding:

The black kids would sit out in the hall while the white kids rehearsed, and they started getting a very weird feeling. People started getting very territorial. There was a fight over Little Inez's doll, whether it would be prettier if it was a white girl's doll. We were feeling that stuff, and that stuff was foreign.

It's not surprising then that Hudson's song and Hairspray Live! as a whole struck such a deep cord with so many viewers this time around. No matter what side you fall on in the various ongoing debates about the issues currently plaguing our country, Hairspray Live! hit home for all of us and reminded us that although we've come so far in terms of equality for all, there's still so much more work to be done.

If you missed out on watching Hairspray Live!, make sure to watch it when it's available online on Wednesday on Hulu. The musical will definitely be a hot topic for the next few days and you won't want to be left out.