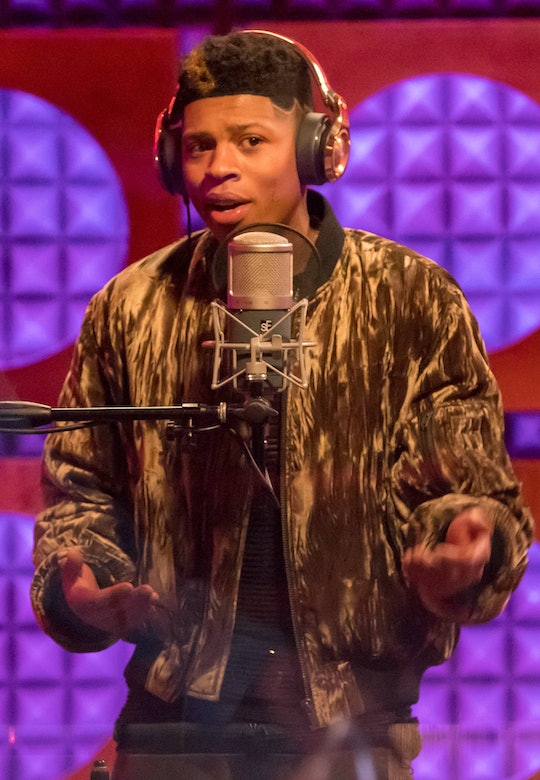 Fans of Empire may have to face it: Hakeem's not really a feminist character (yet!), but he's getting there. Viewers' unproblematic fave reached new heights on Wednesday's episode, "The Naked Villainy," during a confrontation that wound up with Kennedy getting hurt. Hakeem blamed her for the fight that broke out, which caused Jamal to hit him with the definition of "victim blaming." Hakeem didn't know it, but he's actually employed it in aspects of his personal life and his music. For once, Hakeem listened to his brother. Hakeem learned about victim blaming on Empire and it was an empowering moment to witness.

Last episode, Hakeem's 21st birthday got a little out of control... to say the least. First off, goons that Hakeem didn't even know fended off the club owner when he wanted Hakeem to pay thousands for the party — that he promised Hakeem he didn't need to pay. While the youngest Lyon wasn't familiar with the random guys, he promised to party with them for the rest of the night (as you do). Well, one of them tried to hit on Kennedy, who is one of Tiana's friends. When she refused, all hell broke loose — and Kennedy ended up getting punched in the face. Hakeem's defense of her? Saying, "Leave Kennedy alone" sheepishly into his microphone. She ended up in the hospital.

This episode picked up with Kennedy suing Empire to the tune of millions of dollars. In a meeting with their lawyers, Hakeem was set to apologize, but Thirsty said that would be an admission of guilt. Thirsty's plan was to dig up Kennedy's past to make her look bad. Upon hearing that, Jamal had enough: he called out Hakeem for victim blaming — and not just for this instance. Jamal took note of the fact that in his raps, the way Hakeem speaks about women, and the way he spoke about Jamal and his sexuality, that his baby bro has blamed victims as opposed to their abusers.

Hakeem may be hard-headed, but he actually took this to heart, especially because his fans are mostly female. He went to the studio and sang a song about women and how strong they are. In his rap, he even apologized to Kennedy: "I take full responsibility for you getting hurt," he said. It may have been a longtime coming, but I'm glad Hakeem took the time to think about what Jamal was saying. Perhaps his 21st birthday was a sign of a new maturity for Hakeem. If so, I can't wait to see what he does next.