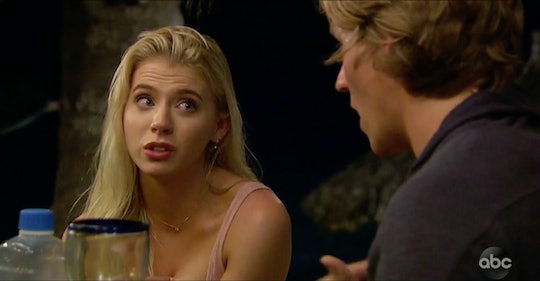 Twins Haley and Emily Ferguson have been a Bachelor Nation mainstay since first appearing on Ben Higgins' season of The Bachelor (yes, together), but they've never had much luck in the actual finding love department. This season, however, Haley made a beeline for the beach without her sister, who's happily in a relationship back home. Sadly, she found herself a pawn in John Paul Jones' quest for Tayshia and, fed up with her years of garbage treatment on the show, Haley launched into a speech on Bachelor in Paradise that had Twitter stanning its new BiP queen.

Points were made as JPJ vented to her about how Derek was using Tayshia for podcast fame (?!). Haley astutely pointed out how it didn't sound much different from how JPJ had agreed to go on a date with her while he was super into Tayshia. He tried to explain that he went on a date with her because Tayshia told him to "test the waters," which, uh, still doesn't really take Haley's feelings into consideration, now, does it?

"How is that fair to me?" she asked. "Test the waters? Are you going to test the waters with me for fun? You told me we had an instant connection. Why would you give me the rose if you didn't really feel that way? I would rather just go home."

Haley made crystal clear that she wasn't interested in "just for fun" roses, and that she was in Paradise for meaningful connections. She flat out called JPJ's manipulative actions "selfish" and put him in his place for stringing her along. Haley could have been trying to pursue other connections this whole time had JPJ been more honest, which he finally copped to and apologized. But then, he told her she was "a big girl" and could have gone out looking for other options if she wanted to. Eventually, Haley walked away, only to unleash a storm of tears and a perfectly articulated rant titled "Why are men?" in Blake's direction. Said Haley:

I shouldn't be confused or upset. I thought I was going to come here and have a good time. I'd rather be home right now with my dogs. Like, I don't give a f*ck. And now I feel like an idiot for even thinking I had a good time. Clearly, he was doing it because Tayshia told him to explore his options and so I'm the idiot. Why do men think they can treat women like this. I don't f*cking understand. Why do men think they can manipulate women for fun? Why do they do this to women? They torment them. They literally torment us. It's not my fault.

Needless to say, Twitter found Blake being the recipient of this particular speech completely delightful.

Pretty much everyone could relate to wanting to be at home with their dogs more than they wanted to bother with dating, which could make Haley the dark horse of Season 6. Let the Haley for Bachelorette campaigns commence, I guess?