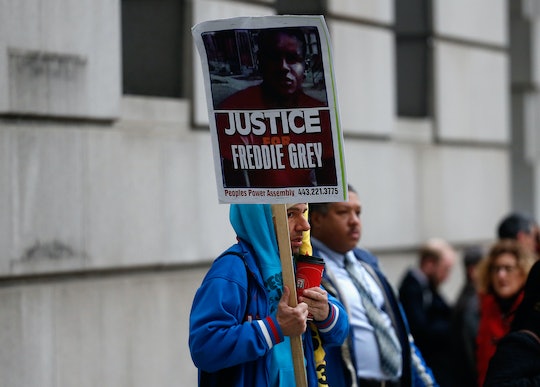 Half Of The People Killed By Police Have Disabilities, Study Shows, But Why Aren't We Talking About It?

Unfortunately, sometimes it feels like the news cycle is glutted with stories of unarmed people who have died in encounters with police. A new study suggests that journalists reporting on these incidents are not telling the whole story, oftentimes because they don't know it themselves. According to research conducted by the Ruderman Family Foundation, half of people killed by police are have disabilities.

The groundbreaking report was co-authored by professor David M. Perry and disability activist Lawrence Carter-Long. Their study was one of the first and most comprehensive of its kind to take on the issue of police brutality and the media's coverage of it. The researchers focused on high-profile incidents, both those deemed illegal and incidents where officers involved were eventually exonerated. While the incidents themselves have received massive amounts of attention from media outlets, advocacy groups, community organizers, protesters, activists, politicians, and lawyers, the study reveals shocking numbers on how often these reports omit key facts. The omissions, besides revealing either inaccuracy or value judgement — or both — in reporting, have failed to call attention to the root cause of police brutality and instead have focused on a symptom: the brutality itself.

This study shows that coverage of police violence more often than not fails to call attention to (or report at all) the role that disabilities plays in an incident. Even if half the Americans killed or injured by police officers do have some kind of disability, that person's disability (and the effects it could have on his or her actions) is left out of reporting, which cleaves the issue from the action around it. There is a lot of talk about intersectionality when it comes to gender and racial inequality, but little attention is given to the crucial intersection of disability and race and class, which, unfortunately, have been overlapping factors in these cases.

Information about the most recent, well-known people killed in encounters with police illustrate the study's findings. Freddie Gray, a name that has become synonymous with police brutality, was a victim of lead poisoning, which is known to lead to developmental disabilities, according to the Washington Post. Some law enforcement officials claimed that Eric Garner “almost definitely…would not have died” if he had not been obese. Though the quotation brings his disability to the fore (which is unusual), it's done as an attempt to justify his death.

In another high-profile case, Sandra Bland had epilepsy and was jailed without her medication. Some have hypothesized that the hormonal side effects of that mistreatment are what led to her death, which was reportedly a suicide. The difficulty in this research — and something the study makes glaringly clear — is that there is no count or system to track how often and why police officers use force against Americans with disabilities. There is no data, and there is no federal requirement to record that information. Researchers looking for patterns or looking for solutions have to think more systemically because any comprehensive analysis is nearly impossible given the scale of the law enforcement system.

So how can law enforcement agencies begin to address this issue? Jay Ruderman, the president of the foundation that ran the study said, “Training is a necessary first step. Reforming the system follows closely behind. The rights of people with disabilities must be respected just like any other American citizen.” Requiring a kind of therapy training for police officers may help reduce these instances of violence. If they are better informed about how disabilities can affect people and how those disabilities present themselves, officers may be better equipped to act in an escalated situation (or to avoid escalation altogether).

Many Black Lives Matter activists have also said that recruiting officers from the communities they will serve may also help alleviate this issue. Knowing your neighbors helps you know when someone is actually a threat. Outreach builds empathy, so any sort of engagement with the community at large or the disabled community would help build those bridges.

But there are ways to address this issue outside of how the incidents themselves are handled. For example, including more characters with disabilities in shows and films would help foster more understanding and empathy. Entertainment in the U.S. is skewed toward an ableist point of view so that anything divergent is viewed as out of place, or even, as this study shows, criminal. Media can strive to stop using "disability" as a metaphor for deviance and monstrosity; those images and tropes, no matter how silly or harmless-seeming, have a lasting effect on actions and the way people with disabilities are treated.

Leaders in the community for people with disabilities have gone to great lengths to outline preferred language; and it's time that everyone began using it. While racial injustice is a hot-button issue, it's not the whole story. If people make efforts to publicize information about people with disabilities and the inequality those people face, it will help spotlight the issue and galvanize action for change. At least, that's the hope.