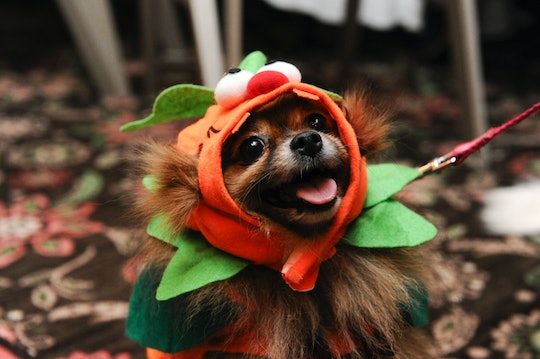 There are so many fun layers to All Hallows' Eve, especially where it concerns Halloween pet costumes. From dressing up your own furry friends to checking out your friends' pet costumes, there's plenty of cuteness to go around. And as it turns out, sales for Halloween pet costumes have skyrocketed in recent years, with nearly $1 billion spent on this industry in 2019 alone. It's good news for pet costume retailers, but probably not what Fido wants to hear.

I adopted my kittens, Reeses and Snickers, just in time for Halloween 2018. I was excited to dress them up, but decided against it because they were too young at the time. This year, however, I bought an adorable witch cat costume from Target (there was only one left!) at the start of October, wasting no time getting into the Halloween spirit. Surprisingly, my tortie Snickers didn't mind the costume, hanging out in it for at least 30 minutes until she had enough. And of course, I took lots of pictures to share with my friends and family.

It appears I'm not alone in this trend, as 26% of 18- to 24-year-old consumers surveyed in National Retailer Federation's Annual 2019 Halloween Spending Survey report they plan to dress up their critters for this year's holiday. When the question was first asked in 2010, 12% planned to dress up their pets, jumping up to 17% nine years later.

The most intriguing stat? A whopping $490 million in Halloween pet costume sales is expected this year, according to CBS New York. That's more than double what was spent in 2010.

This all being said, it's important your pets are comfortable if you plan to dress them up. The witch hat I chose, for instance, has a soft and adjustable velcro strap, as to avoid wrapping anything tight around Snickers' neck. And if Snickers had displayed any discomfort or fear, I would have taken it off right away. A good picture is not worth your pet's well-being.

On the topic of safety, make sure your pet's costume doesn't have any choking hazards (think buttons and small accessories) and never leave them alone when they're dressed up, according to PetHub. And most importantly, make sure they can breathe!

If you do decide to get your pet a costume this year, consider choosing from the list of this year's favorites, according to Fast Company:

Honestly, I'm a little confused by the cat and dog options, but I assume people are dressing up their dogs like cats and vice versa. And I'm not surprised by the pumpkin pick, as it seems like the easiest choice.

So to all the pet owners out there, Happy Halloween! I can't wait to see all of your furry friends in costume.