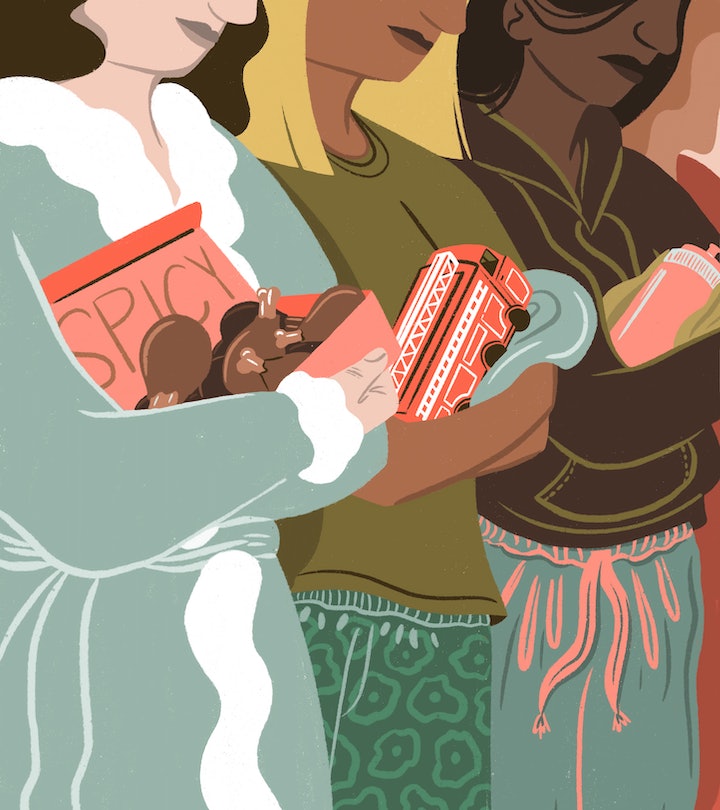 "I Thought The Box Of Fried Chicken Was My Baby": Tales Of Postpartum Delirium

Three weeks after my first child was born, in the haze of postpartum sleep deprivation, I found myself eating leftover fried chicken over the sink in a bathrobe, cradling my baby in one arm. I remember the midnight meal clearly, because it felt like a tragi-comic answer to “who am I now that I’m a mother?” (A: a multi-tasking lover of secret spices.) Then I turned from my drumstick to my 3-week-old, and discovered I was not, in fact, holding my baby in the other arm. I was cradling a box of fried chicken. The realization sent a bolt of panic through me — where’s the baby? — before I realized he was in his crib, sleeping.

It was what I can only describe as a postpartum hallucination, common to many new parents, and exemplified by Reddit archetype Sleepy Dad Mistakes Rolled Up Robe For Baby. A 2007 Sleep study examined the dream-states of pregnant and postpartum women and found that episodes where dreams and reality are confused are so common they can be categorized by genre. “A typical episode, which we dubbed the baby-in-bed (BIB) nightmare pattern, involves a dream that the infant has been lost in the mother's bed,” wrote authors Tore Nielsen, Ph.D., and Tyna Paquette.

Ask a parent about the early weeks with a newborn and you will often find she has blacked much of it out, simply coming to on the far side with a chubby 3-month-old. Sleep deprivation, which is linked to cognitive decline and memory loss, is certainly a part of it. There's also plenty that's worth forgetting: tending to an enormous flesh wound, closely monitoring bowel movements, talking about your nipples with second cousins. What we tend to remember is the funny, the scary, and the surreal. These nine tales from the postpartum blackout make a good case for shoring up your support system before coming home with the baby carrier. They also demonstrate how flimsy our sense of reality is (take it from me, proud mother to a Chicken Big Box Meal). Read on if you dare, and remember that it does get better.

I thought the bathroom rug was inch-worming across the floor like an eyeless Muppet. My baby was maybe 3 weeks old at the time? (She’s now 18.) I was washing my hands and turned around and just stared at the rug for probably a full 10 seconds, spacing out, and then the rug blurred for a second and I realized that it was moving. Just inch-worming across the bathroom floor. I remember just thinking it was curious, not scary. Then again, the president had turned his head and spoken directly to me from the TV the day before (no, I don’t recall what he said, alas, but he was annoyed at me — it was a scolding, which was not what I needed at the time), so the moving rug, in comparison, was not as bad. It just seemed kind of odd and cute. It took me maybe 10 seconds to realize that no, the rug was not, in fact, moving. I was just so, so, so tired. It was demoralizing, but also kind of funny. I told my husband and mom. My mom kept reassuring me that I would not always be this tired.

I woke up to my husband burping a pillow, thoroughly believing it was our daughter. I woke up and he was lying there burping a pillow. I asked him what he was doing and he got annoyed that I was asking and said, “I'm burping her.”

At 3 months, I was about to lose my mind, so I pumped for the first time and my husband offered to take a middle-of-the-night shift. I bought ear plugs (to stop my auto response to the crying). My husband put the pump parts in a pot on the stove to sterilize, but he was exhausted too and nodded off. At 2 a.m., he woke to thick smoke, a charred pot, and screaming detectors. But I had those damn ear plugs in and slept right through. On the one night I could finally sleep, my husband ended up having to shake me awake. We were so freaked out that we couldn't go back to sleep and sat there crying together. The next day I threw out the ear plugs.

I felt good and alert, although I lost my short-term memory entirely and I found that I kept hitting parked cars. I hit our house cleaner's car twice and a car in a parking lot once. These accidents came as a total surprise each time they happened.

In the worst of my sleep deprivation, I was once nursing my baby and must have dozed off. When my husband walked in the door and woke me up, I saw he didn’t have the baby and said “where’s the baby?!” I had forgotten that I was holding him.

I hallucinated frequently the first three months. Often, I hallucinated that I was my baby. [Laughter] I would look at my hands and marvel at how small they were. Or I would touch my face and think about how tiny my nose was, or how soft my cheeks were. [Laughter] There were a few times I thought our dresser was the baby’s bed and I slammed my head into it leaning down to pick her up. I had no idea I should expect hallucinations. No mom ever discussed that with me. I only shared it with my partner.

I was really worried about falling asleep while nursing and rolling over on the baby (who slept in a bassinet next to the bed). One night I woke up convinced he was in bed with me and I'd fallen asleep and I was frantically searching for him and I totally found him and my husband went, "Why are you clutching a pillow?" And I was like, "It's the baby."

I remember thinking the baby was twins. Another time I somehow thought she was a truck while I was nursing her. It made sense to me at the time!

The first few months of my daughter's life coincided with my most frequent and intense periods of sleep walking. The dream was almost always the same: I was looking for my daughter. Sometimes I'd wake myself while I was checking the sheets in my bed, sometimes I'd wake as I was walking into her room. It seemed odd, but I never felt unsafe or worried. Just part of my process of becoming a parent. I'm not sure exactly, but I think it stopped happening before she was 6 months old.

The worst one was when I woke up cradling my water bottle and burst into tears because I thought it was my baby. My daughter is almost 5 now, and I’m eight months pregnant and about to do it all over again.

If you or someone you know is experiencing depression or anxiety during pregnancy, or in the postpartum period, contact the Postpartum Health Alliance warmline at 1-888-724-7240, or Postpartum Support International at 1-800-944-4773. If you are thinking of harming yourself or your baby, get help right away by calling the National Suicide Prevention Lifeline at 1-800-273-8255, or dialing 911. For more resources, you can visit Postpartum Support International.