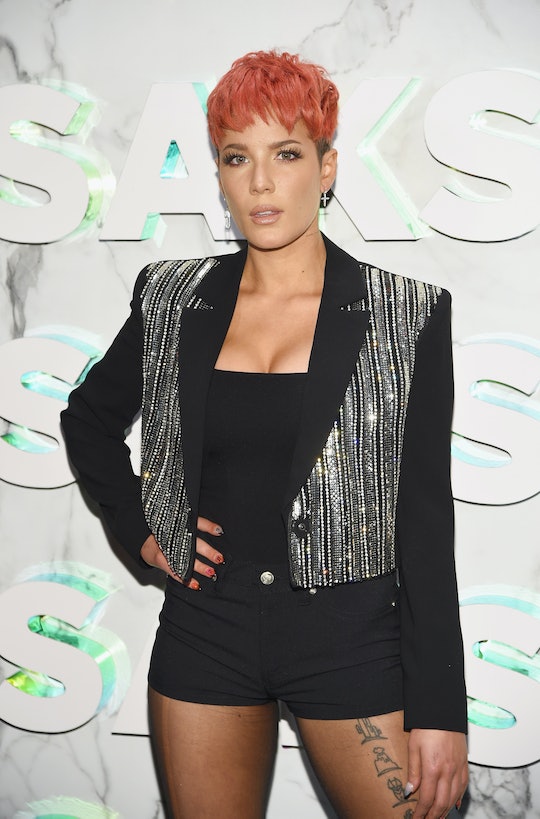 I'm not famous, but I have no doubt certain aspects of celebrity life are amazing. (The money and fans would be nice, along with getting to do what you love.) But I'm not sure I could handle the paparazzi or constant scrutiny; between social media and tabloids, so much misinformation and insensitive commentary are floating around out there. Not to mention the pregnancy rumors. If a female celebrity happens to gain weight, has a particularly large meal, or an oddly-fitting outfit, everyone and their brother is suddenly predicting her due date. However, Halsey's response to pregnancy speculation is perfection.

According to Us Weekly, it all started on Monday, Feb. 18, when the "Without Me" singer posted a cryptic message on Twitter that hinted at big news. "I have The Biggest Secret (unrelated to the album) and when you guys hear it, some of you are gonna explode. Into actual pieces," she tweeted. Naturally, the Grammy-nominated singer's fan base went crazy — and started taking guesses as to what this epic secret might be. A movie? A different album? What could it be? Cue: Pregnancy rumors immediately start flying.

Yet another Twitter user simply commented with a series of heart, baby bottle, and baby emojis.

As People reported, Halsey was quick to shut down the rumor mill before it got too out of control. "People think my last tweet is me hinting I’m pregnant," she tweeted later on Monday, "Which means I’m either: a. gaining weight b. acting weirder than usual. Jokes on u, I’m doing BOTH. However STILL not pregnant!" LOL. Props to Halsey for responding in a classy, yet humorous way.

A follower then asked what was wrong with gaining weight, to which Halsey replied, "Nothing at all!!!!! I feel really good right now tbh!"

To be fair, the singer did throw around the "P" word back in July during an interview with Marie Claire. "Once the tour is over, I feel like anything could happen," she told the publication. "I could decide I want to move to Italy for a year and write. I could get pregnant. I finally have enough stability in my career where I can take a breath. I feel like I can let life happen."

It's worth noting, however, that she later clarified the meaning behind this comment via Twitter. "I could also visit the moon or relocate to a remote island," she tweeted. "It was a hyperbole packed in a sentence full of other 'I could's that imply the possibilities are endless. Don’t worry :) the only baby I’m making is my next album!!!!!"

So yeah. It's probably safe to say that Halsey doesn't have any plans for a baby in the near future. And although the singer did leave the possibility wide open with her "biggest news" teaser, it's a good rule of thumb not to speculate about what's going on with a woman's body. Because even if she is gaining weight and posting cryptic messages on social media, it could be something else entirely — and not everyone will respond to "Are you pregnant?" as graciously as Halsey.