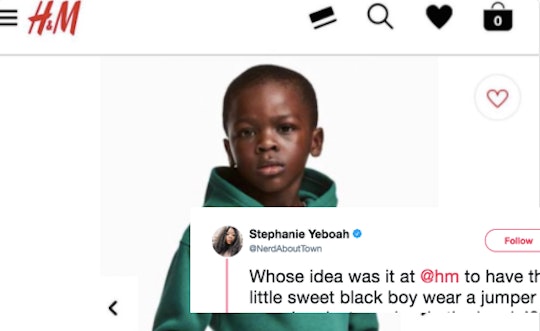 Whenever a major corporation releases an advertisement that people deem offensive, it feels particularly outrageous on two counts: for the content itself, as well as for the fact that there were presumably many different people who reviewed it ahead of time and who still gave it the green light. In a tweet Sunday night, New York Times columnist Charles M. Blow called out an image on H&M's U.K. website, according to The Huffington Post, and now people are pissed at H&M for a sweatshirt some are considering "racist" due to an image of a young black boy posed for the retailer wearing a green sweatshirt that read “Coolest Monkey In The Jungle.”

More Like This
People Have Thoughts About A Mom Saying That Parents Are "The Real Teachers"
YouTuber Faces Heated Criticism For Putting Down Family Dog After It Bit Her Son
Florida Homecoming Queen Accused Of Rigging Votes With Mom
A 25-Year-Old Mom Thought She Was Pregnant With 7 Babies. She Gave Birth To 9.

Many on social media quickly picked up on the fact that dressing a black boy in an item of clothing that referred to him as a “monkey” — an ethnic slur with a long and painful history — is far more than a mindless gaffe or, as is often the case with kids' clothing, a bad attempt at a tasteless joke. Many believe the move was actually "intentional," and H&M has confirmed that a routine regarding its advertising process was not properly followed.

An H&M spokesperson confirmed that the image had been taken down, according to The Independent, and said that the company “[apologizes] to anyone this may have offended." The apology, however, hasn't done much to quell the backlash on social media, where some outraged users are actually calling for a boycott of the brand. H&M U.S. media relations issued an additional statement to Romper via email:

We understand that many people are upset about the image. We, who work at H&M, can only agree. We are deeply sorry that the picture was taken, and we also regret the actual print. Therefore, we have not only removed the image from our channels, but also the garment from our product offering globally. It is obvious that our routines have not been followed properly. This is without any doubt. We will thoroughly investigate why this happened to prevent this type of mistake from happening again.

Much of the reaction to the image was primarily bewildered anger. "Whose idea was it at @hm to have this little sweet black boy wear a jumper that says 'coolest monkey in the jungle'," one Twitter user asked.

Some Twitter users stepped in to suggest that part of the problem may have stemmed from a lack of cultural understanding on the part of the Swedish retailer, or that it was, for one reason or another, an unintentional misstep. But many argued that the ad should have been caught, even if the company was oblivious to the history associated with the using the slur.

Others noted that, when you compare the shirt to the clothing worn by white models, it's not actually all that difficult to argue that the error was intentional. On the same page as the black child in the green sweatshirt, white children posed in similar versions of the same shirt, according to The Huffington Post — except theirs carried the slogans, "Mangrove Jungle Survival Expert," and "Junior Tour Guide." Twitter user @Baker, a radio personality, asked "Really @hm I just want to know why the black boy is wearing a hoodie that says 'coolest monkey', & the white boy is wearing a hoodie that says 'Expert'. The Art Director behind this is trash."

Beyond the image itself, other users were quick to look at other products sold on the site. One user asked why "the black boy is wearing a hoodie that says 'coolest monkey', & the white boy is wearing a hoodie that says 'Expert.'" The user is referring to another printed hoodie on the site shows a young white boy wearing an orange sweatshirt with the words "Mangrove Jungle Survival Expert," with an image of a tiger on the front.

While the image prompted outrage, some on social media used the H&M incident to produce an image worth sharing, taking advantage of the outrage to demonstrate and "fix" the image that got so much attention in the first place. "If you want our business," one Twitter user expressed, "This is how we're to be represented." The tweet was accompanied with an image of a sketch of the young boy in the original ad wearing a green sweatshirt that reads, "Coolest King In The World."

In its additional statement to Romper, H&M said its "routines" had not been followed properly, so it's clear it is examining how the ad made it through all of its different channels and checks. The image has since been removed from the website alongside the apology.