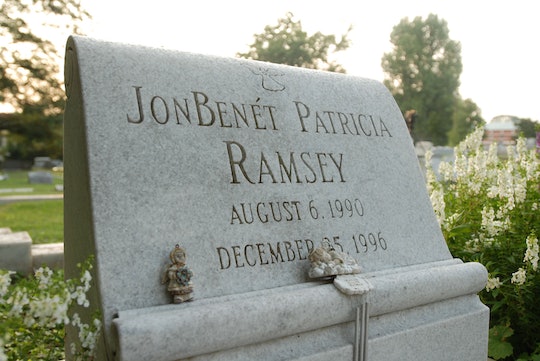 Nearly 20 years after her murder, the death of 6-year-old JonBenét Ramsey remains a mystery. On the morning JonBenét was went missing, the girl's mother, Patsy Ramsey, found a note saying their daughter had been kidnapped from their Boulder, Colorado, home. JonBenét was found hours later in the home, beaten and strangled on Dec. 26, 1996, according to police reports. No DNA was found on the note, but the biggest clue may be the handwriting of the note itself. The Case of: JonBenét Ramsey, a six-part docu-series airing Sept. 18 on CBS, will look into the details of this unresolved murder, including an analysis of the note. What does a handwriting analysis of the JonBenét ransom note reveal?

In an interview with ABC that aired on Sept. 27, 1998, Donald Foster, a professor at Vassar College and textual analyst, was contacted by Boulder District Attorney's office to analyze the note's handwriting, as well as writing samples from the Ramsey family members. Although he had a confidentiality agreement with the Boulder Police Department, the police's summary of his findings indicate that Foster identified the writer of the note as Patsy Ramsey. The use of exclamation points in the note was compared to Patsy's use of several exclamation points in some of her other writing, including a Christmas card.

In 2008, new forensic techniques revealed that DNA traces from a man on JonBenét’s pajamas, which were also a match for a drop of blood found on her underwear, did not match any of the Ramsey family members, including Patsy Ramsey. Boulder County district attorney, Mary T. Lacy, wrote in a letter to the Ramseys in 2008 that the findings "vindicated" the Ramsey family, according to the Los Angeles Times. Patsy has never been convicted of any crime, and she has denied committing the murder in past interviews.

When Romper reached out to the family's representation, attorney L. Lin Wood had the following to say regarding the family's involvement in the crime:

In terms of the accusations against John and Patsy Ramsey, the Boulder DistrictAttorney, Mary Lacy, publicly exonerated them in 2008 based on irrefutable DNA evidence. She apologized to the family and assured them that in the future, they would be correctly treated as victims. The days of Ramsey accusations should have ended then and there.

There are many interesting details about the ransom note. It was written on a piece of paper from the Ramsey's home. Many theories have also emerged from the fact that the ransom note asks for $118,000 — an oddly specific amount, and one that also matches John Ramsey's bonus. John was also removed from the suspect list with DNA evidence, and was never arrested or convicted of any crime. John's legal representation did not immediately respond to Romper's request for comment.

Investigators have often pointed out that the ransom note is long. In a 2006 interview with The Washington Post, Mark McClish, a former federal marshal and author of I Know You Are Lying: Detecting Deception Through Statement Analysis, said that he believes the note is "too wordy" to be a real ransom note.

Steve Thomas, a former Boulder Police Detective who wrote the book JonBenet: Inside the Ramsey Murder Investigation, alleged that Patsy wrote the ransom note in a May 2000 interview with John, Patsy, and Thomas on Larry King Live. Thomas stated he believed whoever wrote the ransom note was the killer. He also accused Patsy of changing her handwriting after the murder.

In 1999, investigators chose not to issue indictments for the Ramseys because (outside of the handwriting theories) there was no evidence that they committed any crime.