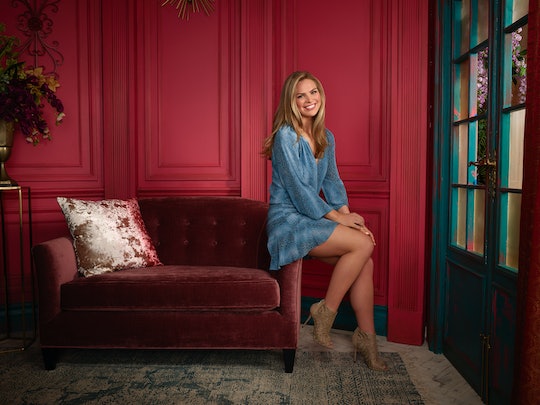 Hannah Proved She Can Put Down A Glass Of Champagne

The drama in the house sent Hannah to her bring on Monday night's episode of The Bachelorette. After the men continued fighting about Luke, Hannah chugged her glass of champagne and finally spoke her mind, which people loved. These Hannah drinking memes on the Bachelorette prove that she's not the only one fed up with all of the guys there — people at home are, too.

Let's be blunt here — the guys on this season of the Bachelorette are super dramatic. They love talking about each other and their drama, instead of talking about Hannah herself. You can understand why Hannah has been so frustrated with them. She told Chris Harrison on Monday night that she wanted just one cocktail party that didn't end in drama or a disaster. But she didn't get that during their cocktail party in Ireland.

During the cocktail party, Garrett asked Hannah if Luke had talked about any of the guys on his one-on-one date, which he had. Hannah was truthful with him about this, but Garrett went and told the other men, too. This resulted in a lot of cursing, arguing, and distraction from the cocktail party, which made Hannah chug her glass of champagne.

Let's just say, people were so impressed with that. She basically turned in to everyone, ever, in that moment. She pretty much meme-d herself in that exact moment.

The best thing about that moment was how relatable it was. Who hasn't been in a place where a little liquid courage is needed before speaking their minds? The way she was able to put it down before rightfully yelling at the men (who were yelling at each other) was absolutely perfect. It proved that Hannah is a pageant queen with a bit of edge to her — she isn't polished all of the time, and that is what people love about her. But it's not like people underestimated her. After all, she did graduate from the University of Alabama in 2017 with a bachelor's degree in communications and information sciences, according to E! News. During her time at Alabama, she was also in a sorority. So, it's likely that she attended a few college parties during her time there where she put down a drink or two.

She's probably had plenty of practice when it comes to putting down a drink, which she showed off during tonight's episode.

If Hannah has shown people on the Bachelorette anything, it's that she isn't afraid to be real. She's not afraid to let her hair down, confront anyway that is in her way, or chug champagne in an evening gown. She doesn't try to be the most polished person every single time, and that is what makes her such a great lead.

Props to Hannah for putting down her drink like she did. She was just as fed up with her group of guys as viewers were back at home, and the best thing was, she let them know that she was upset. If anyone needed any more reasons to love Hannah, this gave them a million more.