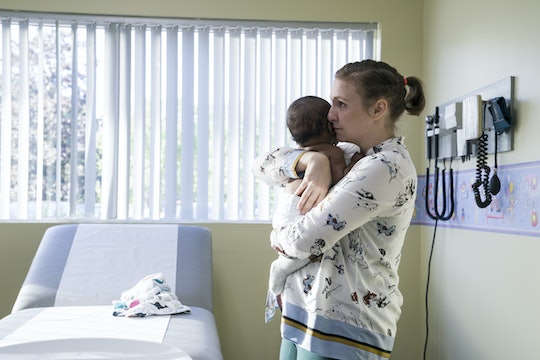 I found out I was pregnant in my former office's bathroom after I picked up a pregnancy test on my lunch break. I had spent the night before boozing with my officemates, downing shot after shot of Bulleit, and chain-smoking Marlboro Ultra Lights into the wee hours of the night. I was regularly working 12 hours a day, and while I was engaged to be married, my husband and I were constantly fighting over wedding plans and our grueling work schedules and our relationship wasn't going super well.

In short, it was not the best time in my life to have a baby, and everyone in my life agreed. "You know, it's not too late to have an abortion," my friends would remind me, every time I'd express concern or anxiety over the pregnancy. I was not a prime candidate for motherhood — in fact, on paper, I might've looked like a terrible mom. But nine months later, I became a mother nonetheless.

I was reminded of the (frankly, not totally unwarranted) judgment I faced as a result of becoming a mom last night, when the Girls series finale aired. After months of facing harsh criticism from her friends for choosing to carry an unplanned pregnancy to term, Hannah (Lena Dunham), the self-absorbed, whiny protagonist of Girls, has her baby, a son named Grover, and is struggling with the first few months of new motherhood.

Given Hannah's almost comically gargantuan level of self-absorption, as well as her perpetually unstable financial circumstances, both her friends and critics of the show questioned her decision to have a child, as well as her ability to raise one on her own. (In fact, her friend Elijah also reminds her that it's "not too late to get an abortion," a last-ditch effort to prevent her from wrecking not only her own life, but the life of her unborn child.) Vanity Fair's recap of the finale suggests that the question of whether Hannah can possibly be a "good" mom is the last one the series leaves us with: "Has Hannah actually grown up enough to be a nurturing mother?" And while Dunham and Girls showrunner Jenni Konner don't explicitly answer that question, it did prompt me to wonder why being a good "grown-up" — or even being a good person — is somehow synonymous with being a good mom in the first place.

Dunham's Hannah Horvath is petulant. She's needy. She elevates solipsism to an art form. And she hasn't changed by the time Grover is born: after struggling to get Grover to latch, she claims her baby "hates" her and storms out of her house, but not before having a breakdown in front of her mom and yelling at her for not recognizing she is in "emotional pain."

The fact that Hannah has an emotional breakdown over her breastfeeding struggles is, if not rational, certainly relatable. (Seriously, what mom hasn't uttered the words "my baby hates me" when they don't latch, without acknowledging that what they really hate isn't you, but your boobs?). But at this point in the episode, the answer to the question of whether Hannah is "grown-up" enough to be a "good mom" is a resounding "no." If you adhere to our cultural conception of motherhood, a "good mom" wouldn't storm out of the house after a fight, nor would a good mom take out her frustrations with her own body out on her own helpless baby. A "good mom" is patient, virtuous, and relentlessly self-sacrificing for the welfare of her own child.

That's why the question of whether Hannah is grown-up enough to be a "good" mom to Grover, or whether she's "ready" to raise a child on her own, is such a useless and, frankly, boring one: it doesn't matter whether she is or isn't. What matters is that she will be, because that is what having a child does.

But of course, that's not who Hannah is, and that's not how motherhood always works, and nor should it; the idea that motherhood has to be about martyrdom is one of the most antiquated, tiresome ideas in our culture. Motherhood is, however, frustrating and exhausting and painfully, painfully dull, particularly in the early days, to the point where even the most selfless and patient of women could be pushed to the brink of sanity.

Early motherhood is grueling enough to turn a so-called "good mom" into a bad one, but it's also essentially like a three-month boot camp to turn a "bad" mom good, because when you are forced to make your needs secondary to another person's night and day and day and night for months and months and months, you become pretty damn good at knowing how to take care of that other person, regardless of whether you felt emotionally prepared for motherhood or not.

That's why the question of whether Hannah will be a "good" mom to Grover, or whether she's "ready" to raise a child on her own, is such a useless and, frankly, boring one: it doesn't matter whether she is or isn't. What matters is that she will be, because that is what having a child does. And ultimately, by the end of the episode, she leans into her new role: not just by finally getting her child to latch (a stale and, frankly, kind of offensive metaphor for forging a bond with your child, as thousands of formula-feeding moms would agree, though Dunham has disputed this interpretation), but by stepping into a maternal role to a sullen teenage girl she sees on the road in apparent distress, who runs away because she doesn't want to do her homework. "Do your homework because it's f*cking good for you," Hannah screams, and in that moment, she becomes more of a mother than any of her friends or the show's critics could've imagined she'd be.

Every 4 a.m. diaper you change, every text you delay answering to read your baby a story, every night you stay in instead of dropping your kid off with your in-laws to go to a karaoke bar, is one more petal unfolding, to the point that before you know it, your adult self has fully bloomed.

When I was deciding whether to continue with my pregnancy, one of the things I asked myself was whether I was mature enough to have a baby. I also asked myself whether having a baby was a good idea, because it would force me to take account of my own failings and mistakes and make me become a better person. The answer to both of these questions was no: I was not ready to have a baby, and it certainly didn't make me a better person, as I'm just as big an assh*le as ever. But having a baby did force me to become a grown-up, whether I was ready to be one or not. I (happily) quit smoking. I (happily) quit drinking (well, at least on work nights). And I (happily) got married, to the man whose inquisitive dark eyes and Groucho Marx eyebrows I see on my son's face every day.

If there's anything I've learned since becoming a parent, it is that most of the time, growing up is not something you do before the act of having a child itself. It's a gradual process that occurs in tandem with raising a child, your adult self slowly unfolding, like slow-motion footage of a flower blooming on a nature show. Every 4 a.m. diaper you change, every text you delay answering to read your baby a story, every night you stay in instead of dropping your kid off with your in-laws to go to a karaoke bar, is one more petal unfolding, to the point that before you know it, your adult self has fully bloomed.

On the list of major life events that force a person to grow up real fast — a death, a job loss, the cancellation of your favorite TV show — having a baby is the one that most sharply reverses the course of your life. You might be the biggest f*cking mess in the world, but the second you have your child that will change, because you are not allowed to be. You don't necessarily become a better person — and Hannah's initial sh*ttiness to her mother is proof of that — but you do become a less selfish one, because you have to be. That was true for me. And I hope — I know — it will be true for Hannah.

More Like This
20 Bridgerton-Inspired Baby Names
Chrissy Teigen Says Her Pregnancy Cravings Are "Comical At This Point"
From One New Mom To Another, You Really Do Need The Hatch
What Is RSV?