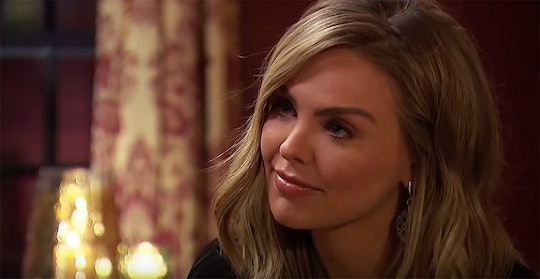 Hannah “Mood” Memes From ‘The Bachelorette’ Are Literal Works Of Art

It's no secret Hannah has a difficult group of guys on Season 15 of The Bachelorette. From immature bickering amongst the suitors to all of the Luke P. drama ('nuff said), dating has been a doozy. Don't believe me? These Hannah mood memes from The Bachelorette are proof that trying to find love on reality TV can be a tiring, frustrating, and even annoying journey.

Imagine you get the chance to find so-called true love on a reality TV show, aka The Bachelorette. In addition to a bevy of professional opportunities (influencers, I'm looking at you), you have multiple guys vying for your attention. It sounds like a pretty sweet deal all around, but as Hannah demonstrated Tuesday night, this journey (yep, I'm going to pull a Chris Harrison and say "journey" one billion times), it isn't all roses.

Hannah's disappointment with her suitors reached a boiling point when Luke P., the Darth Vader of Season 15, got into a confrontation with Luke S. about who's worse of a person. I kid.

The conversation was actually about an incident that occurred during last week's group date, when Luke P. allegedly body-slammed Luke S. on the rugby field.

Hannah didn't seem amused by the back-and-forth, to say the least, a sentiment many fans couldn't help but point out via Twitter.

"A MOOOOODDDDD," someone captioned a fed up looking Hannah.

Another fan penned: "Hannah’s face is all women dealing with the emotional labor of men’s BS."

Someone else wrote: "Hannah's facial expression is so relatable."

Yeah, it's clear Hannah is pretty over everything at the moment. And if you've followed the Alabama native's journey from the jump, then you already know that she goes through it this season.

“I don’t think there was a certain moment (that made me want to quit). It was more just, ‘This is hard. This isn’t going to work,’ she said, according to Entertainment Tonight. "Not as dramatic (as his fence jump) — it was more a conversation of like, ‘I don’t know if this is going to work for me.'"

She continued: "I knew it was going to be hard, but not as hard as it was. And just emotionally, physically — you think it's gonna hit one part where it's like, 'OK, that was the hardest thing.' And then it's like, 'OK, again? When is it gonna get easier?'"

Unfortunately, it doesn't look like it will get any easier for Hannah in the immediate future. Luke P. is still around (Luke S. quit in a very dramatic fashion), and he's the most loathed contestant in the house. Making matters even more tense? Luke. P has a knack for overstepping his boundaries, like lurking around Hannah any chance he gets, to name just one creepster example.

But the bright side is Hannah has a lot going for her when it comes to Jed, Tyler C., and Peter, and I have a feeling Hannah's "mood" memes will take on a more upbeat tone as she nears the finish line.