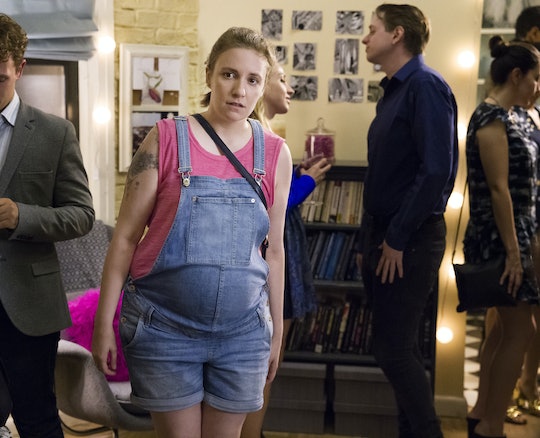 Let's Get Real — Is Anyone Really 'Ready' For Motherhood?

In episode eight of HBO's final season of Girls, Adam (Adam Driver) comes to his ex-girlfriend Hannah (Lena Dunham) and announces that he wants to raise her child with her. After making this insane declaration, he asks her, point-blank, “Why do you want a baby?” Her answer is roundabout, ridiculous, and unbearably beautiful.

This is Hannah's answer to Adam's blunt question. This is how she knows she's ready to have a baby. And even though critics have maligned Hannah's storyline, arguing that unplanned pregnancy is a stale TV trope and that it's unrealistic for someone as self-absorbed as Hannah to want to raise a baby, it's an answer that every woman who's ever had a child, regardless of whether the circumstances were in her favor, can recognize.

Unlike Hannah, who is in her 20s when she gets pregnant, I got pregnant in my mid-30s, an age generally considered socially acceptable to have a baby. But whenever people asked me why I wanted a baby, I gave them an answer that was very similar to hers.

Like Hannah, I spent most of my life not dreaming of motherhood. There was no coveting other people's children, no inexplicable love of baby clothing. Dunham, however, feels differently, according to her book, Not That Kind of Girl. I read the book a few years ago, and when I came to the essay where she talks about wanting to become a mom, I remember pulling it back from my chest a little, as if to create distance from it.

"This person knows she wants to be a mother?," I wondered, thinking of Dunham's self-absorbed millennial persona. "How does any one person KNOW they want to be a mother?"

At the time, I was 35, and had spent most of my life not wanting kids. The fact that a 20-something was writing about knowing she wanted to be a mother nearly knocked me over. And frankly, it made me think she was a little crazy. "Live your life when you’re in your twenties," I thought. "Enjoy your freedom!"

I was also pregnant at the time, so to a certain extent, I understood. My decision to have kids was guided by a gut feeling that was ready, laced with a palpable sense of fear. I didn't feel emotionally prepared for motherhood in any way. I had only known a question that kept popping up in my brain: "What if I might want to be? What if I might want to know this thing?"

When we talk about motherhood, we typically discuss it as something that requires decades of training and preparation, like an athlete training for the Olympics. We're supposed to be "ready" to have kids, even if we don't know what that readiness entails. The truth is, though, that sometimes you don't feel ready. You just know it's the right decision for you. That's a feeling that we don't talk about out loud, but it's one that Dunham captures perfectly.

Episode nine of Girls opens with Hannah talking about the fear associated with bringing a baby into the world. Her best friend, Elijah, reassures her that she can get an abortion if she regrets her decision, though at this late stage of her pregnancy, it might be hard to find someone who will perform one.

“I’m not getting an abortion, Elijah. I’m having feelings,” she responds.

Hannah's feelings are justified. There should be fear associated with impending motherhood. Pregnancy is a major undertaking, no matter how much you know in your heart you want to carry a child. It is rife with internal conflict. Taking care of yourself is now both crucial and often in opposition to taking care of the being growing inside you. But acknowledging that pregnancy is complicated doesn't mean that you can't also know, deep down in your heart, that it is the right choice for you.

Choosing to have a child is just as revolutionary as choosing not to have one.

By writing Hannah's pregnancy into the show, Dunham wasn't just showing a 20-something woman making the decision to carry a pregnancy to term — a surprising choice in itself, given the show's previous frank depiction of abortion and how more and more millennial women are delaying parenthood these days. She's not just showing us that choosing to have a child – the sincere and deliberate decision of it – is just as revolutionary as choosing not to have one.

She's showing us that it's OK to want a baby, without being fully able to explain why. It's OK to not want kids and then later arrive at the understanding that you're ready to have one, regardless of whether you're 25 or 35. And it's OK to be crazy and raw and open and young and to want to be a mother.

Yes, there is a freedom that is lost with having a child. But the loss of freedom isn't always painful. Sometimes, it's a saving grace.

Eventually, Hannah decides to leave New York City to teach writing. Although an older woman writer warns her earlier in the series that it's impossible to be a writer and a mother, she wants to leave New York City to honor her dreams – not to desert them. Her decision proves that motherhood doesn't always mean death; it isn’t always tied to a loss of self and loss of youth. Youth and motherhood can happen, miraculously, in tandem. Yes, there is a freedom that is lost with having a child. But the loss of freedom isn't always painful. Sometimes, it's a saving grace.

In the latest episode, Hannah interviews for the job she will take. “Pregnant women and young mothers are the most vital force on this earth,” the interviewer says.

I turned off the show, longing for my own belly to be extended again, to be the kind of force that I once was. Young-(ish), and vital - and though no longer free, a true representation of who I had secretly always wanted to be, whether I had always realized it or not.