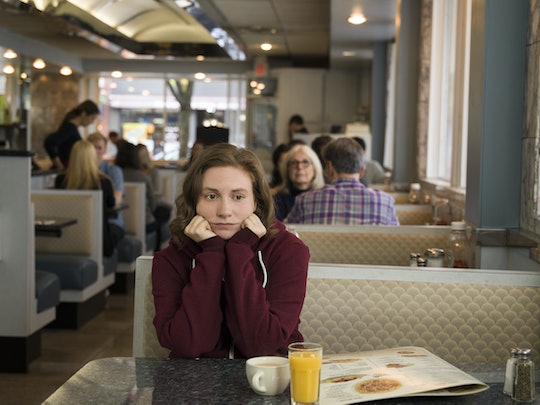 Hannah Adjusts To Motherhood On 'Girls'

The series finale of Girls jumped forward quickly from Hannah's pregnancy to her struggles with adjusting to motherhood after welcoming her son Grover. Marnie had moved in with Hannah to help her with the baby, but the atmosphere was far from ideal. The tension was palpable as Marnie tried to micromanage everything and Hannah snapped at her over every little thing. Much of that tension manifested in Hannah having trouble with latching, which was a relatable issue for a new mother to face.

Though Hannah had successfully breastfed her son for a month, ever since then she had had trouble getting him to latch. All of her attempts only seemed to stress her and the baby out, which didn't help matters much at all. That brought up a lot of normal, expected debate between her and Marnie about whether it was better to breastfeed or formula feed (or whether there was any difference at all), but it ended up being more of a metaphor for Hannah's trouble with adjusting to motherhood in general. It was one persistent issue that brought up every other issue and made Hannah realize the real weight of her decision to have a baby.

The finale, appropriately called "Latching," wasn't just about Hannah getting her baby to breastfeed successfully. It was about her bonding with him, and accepting the new life she had embarked on.

Any major life change takes some adjusting, and Hannah's transition to motherhood was particularly tough. Not only was she welcoming her new baby, but she was also uprooting her entire life to take on a new job at a college upstate. Then she had to deal with Marnie's constant meddling (and her singing along to "Fast Car" even when told not to) as well as her own anxieties as a new mom figuring it all out. Her inability to get Grover to latch represented the myriad of other issues she was facing.

Hannah wasn't able to get Grover to latch until she made peace not only with her new life, but with her decision to be a mom in the first place. The reality was a lot harder than she had expected it to be and it was understandably difficult for her to come to terms with all of the changes her life had undergone in such a short time, which is something that many new moms have had to face. And to deal with it, Hannah had to learn to let go a little and not be so hard on herself. Once she was able to relax, things got a little easier. It wouldn't be smooth sailing forever, but getting Grover to latch was a victory that made the future struggles seem like something Hannah could handle.