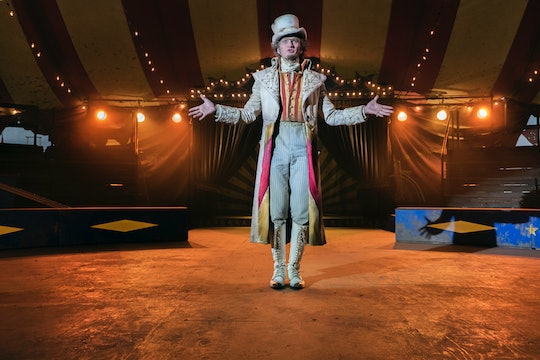 Warning: Episode 10 spoilers ahead! A Series of Unfortunate Events has filled its supporting cast with some pretty incredible actors, but the Season 2 finale also served up a few truly adorable guest spots. Star Neil Patrick Harris' kids Harper and Gideon made a cameo on ASOUE, as did Harris' husband David Burtka. As cute as the young stars were, the scene they found themselves in was perhaps the most gruesome of the series. All the gore happened off-screen, but the implication was more than horrifying enough.

In the final episode, "The Carnivorous Carnival: Part Two," the Baudelaire children found themselves in yet another sticky situation. They had been hiding at the Caligari Carnival in disguise as a two-headed "freak" named Beverly and Elliot. It was going about as well as something like that could (having met up with librarian-in-disguise Olivia Caliban, they were set to escape soon) until Count Olaf decided on a drastic way to draw a crowd to the struggling carnival. He trapped two starved lions in a pit and announced he would be feeding one of the performers to them.

The horrific attraction did indeed attract an audience. And three members of it were especially significant because they were Harris' family: Burtka portrayed carnival attendee Mr. Willums, with Harper as Little Trixie and Gideon as Skip. Jill Morrison played Mrs. Willums, the fourth member of the family.

They weren't the kind of cameos you could miss in a glance, either. Every member of the Burtka-Harris family got several moments of screen time, and even a few lines each. After Count Olaf hyped up the crowd for the awful events to come, he asked them if they had any questions. Mr. Willums, Skip, and Little Trixie absolutely did.

First Mr. Willums wanted to know why Olaf was the one who got to choose which carnival worker jumped into the lion pit, which he did by plucking a name out of a box at random. Patience already wearing thin, Olaf answered that it was his idea, so of course he was the one who would choose. Then Skip had perhaps the most relevant question of all: was feeding someone to a lion for entertainment even legal?

Though the answer is almost definitely no, Olaf wasn't interested in his plan being foiled by an adorable moppet in the crowd. He told Skip not to spoil the fun. Finally, Little Trixie wanted to know if the lion-eating would be scary, and Mr. Willums' very meta response was that this show was meant to be family entertainment. Surely whoever was eaten by lions deserved it!

The Willums family's enthusiasm soured once they actually witnessed Olivia Caliban being devoured, and both little ones agreed they wanted to go home. It makes sense that Harris' family would find their way into the series at some point, because Burtka is also an actor and apparently the twins are fans of the show. When Season 1 premiered, Harris told E! News that they got a sneak peek of the episodes and enjoyed them thoroughly:

They loved it. They thought it was silly. It's dark. They were a little freaked out at times, but just when it gets too dark, it gets silly again. So for kids who are six and up, they were a little spooked and then got a big laugh right afterwards.

Though the scene they were involved in was fairly dark, in the same interview Harris explained that he showed his kids all the steps of his transformation into Count Olaf so they understood the process and it wasn't too strange for them. The same likely held true for filming; seeing the staged sets and practicing lines probably took the sting out of the fictional devouring.

Unless the Willums become unexpectedly important in Season 3, that was the last fans will see of Harris' family on ASOUE. But they more than made an impression in their single episode appearance.