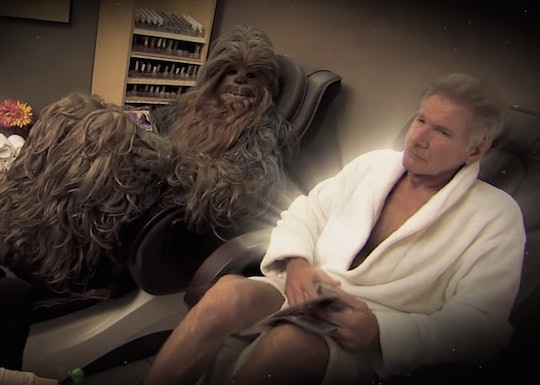 If you missed the big Jimmy Kimmel Live! episode that was completely devoted to all things related to Star Wars: The Force Awakens, then you missed the best thing on television this week. There was a whole lot of fun to be had during the episode, for sure, but one skit in particular was brilliant. Why? Because Adele’s new song "Hello" (maybe you've heard of it?) has certainly been a great soundtrack for all of us to reminisce to, but watching Harrison Ford and Chewbacca on Jimmy Kimmel, remembering all the good times they had together while it plays in the background? That’s even greater.

A big thank you is owed to Adele for facilitating the reconciliation of these two old friends. With the kind of history they share (spa days and games of Connect 4, anyone?), there was no way Kimmel could allow the rift between them to continue. Even though the rift was apparently due to Chewbacca sleeping with Ford’s wife. Awk.

Anyway, Kimmel, Ford and Chewbacca nail it with the perfect convergence of pop culture references in this skit. The only thing we’re missing is a baby dressed as Princess Leia or an Ewok, am I right?

First, while Kimmel is doing a segue bit, he gets word that there's "a jumper" on the roof of their building. He goes outside to check it out. Lo and behold, who's getting ready to jump?

Not Chewy! Kimmel quickly gets on the megaphone and tries to talk him out of it, but there's a bit of a communication breakdown, what with Chewy not speaking English, and Kimmel not speaking... Chewbaccan? (I'm sure some more-hardcore fan is about to correct me on what language Chewie speaks, and I welcome the correction.)

But who's that? It's Harrison Ford! Who apparently wants him to jump. Ice cold. (Although, it makes sense after what Chewbacca did with his wife. Say it ain't so, Chewy.)

Kimmel takes the reins here, trying to remind Ford that he and Chewy are friends, and that they've had some good times together. Apparently this gets Ford right in the feels.

See, this is what "Hello" does to you. Thanks, Adele.

Getting their nails did.

And let's not forget Chewbacca with his Lego Millenium Falcon. Perfection.

It's enough to remind Ford that their friendship truly is worth saving. He talks Chewy off the edge, they reunite with a giant hug, and all's well that ends well.