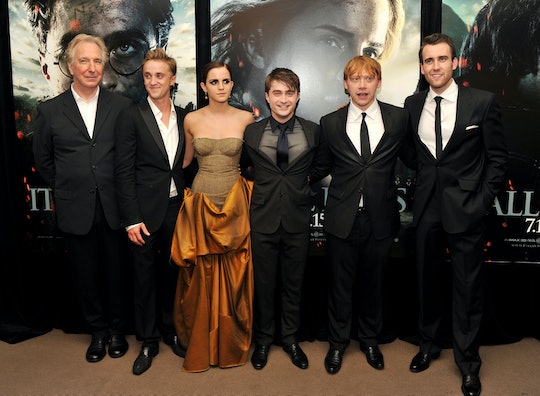 Fans of the epic Harry Potter movies lost the beloved face and voice behind a lead character on Thursday. Alan Rickman died after suffering from cancer, BBC News reported. But fans certainly weren’t alone in their mourning; by Thursday morning, several Harry Potter film stars reacted to Alan Rickman’s death on social media, offering touching tributes to the man responsible for bringing the complicated story of Professor Severus Snape to life over the course of all eight movies in the blockbuster franchise. Actors including Emma Watson, Daniel Radcliffe, and Sir Michael Gambon — who played Albus Dumbledore — reacted to the news with heartfelt messages.

On Thursday morning, J.K. Rowling posted a tweet expressing her sadness at hearing the news. “There are no words to express how shocked and devastated I am to hear of Alan Rickman's death,” Rowling wrote. “He was a magnificent actor & a wonderful man.” In a second tweet, Rowling added: “My thoughts are with Rima and the rest of Alan's family. We have all lost a great talent. They have lost part of their hearts.”

James Phelps, who played Fred Weasley in the film series, tweeted that he was “shocked & sad to hear Alan Rickman has passed away.” Phelps called Rickman “one of the nicest actors I've ever met” and sent his thoughts and prayers to Rickman’s family.

His twin brother Oliver Phelps, who played George Weasley in all eight movies, added: “Terribly sad news about the passing of Alan Rickman. A funny and engaging person who put a shy young actor at ease when I was on HP.”

Speaking to BBC Radio 4, Sir Michael Gambon, who played Hogwarts headmaster Albus Dumbledore in the Harry Potter film series and starred opposite Rickman in several stage productions, called Rickman “a great friend," according to the BBC:

Everybody loved Alan. He was always happy and fun and creative and very, very funny. He had a great voice, he spoke wonderfully well. He was intelligent, he wrote plays, he directed a play. So he was a real man of the theatre and the stage and that's how I think of Alan.

Emma Watson posted a message to Facebook saying she would miss her conversations with Rickman:

The actor’s death came as a shock to his fans and colleagues, many of whom took to Twitter to express their sadness upon hearing the news.

Daniel Radcliffe, who played Harry in the films, released a long, heartbreaking statement calling Rickman "one of the greatest actors I will ever work with," according to a Tweet from a Harry Potter fan page:

Rickman was one of Britain’s best-known actors, thanks to the variety of roles he played, including husband Harry in Love Actually, Hans Gruber in Die Hard, and Severus Snape in the film versions of the Harry Potter books. According to The Guardian, Rickman died in London. The outlet posted a statement from Rickman’s family saying that the 69-year-old actor was “surrounded by family and friends” when he died.