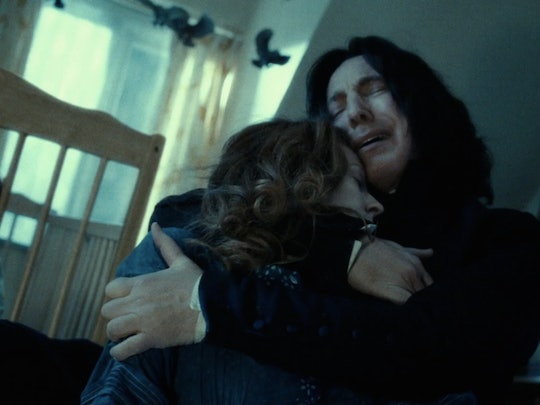 This morning the wizarding world suffered a great loss. Snape, who played the muggle Alan Rickman, died at age 69. Snape is one of the most complex people in the Potterverse. He's cruel, he's mysterious, but we learn that he's also loving, devoted, and misunderstood. He goes from being a feared teacher to the half-blood prince, teaching students and fans lessons of humility and integrity along the way. And that is just Snape's character. Much more can be said of Rickman's own integrity. It is a sad day, especially for Harry Potter fans reacting to Alan Rickman's death on Tumblr.

Besides being known for playing Snape, Alan Rickman had one of the most diverse careers imaginable, from Romeo and Juliet to Die Hard to The Deathly Hallows. He also had one of the most recognizable voices on the screen — a favorite of imitators who could get close, but it's always just that: an impression. He could use his grave demeanor for humor, for Shakespeare, and to strike fear into any Gryffindor's heart. The responses to this loss run the gamut from denial to despondency. Here are the themes of Tumblr users' responses.

Some fans turned their sadness into inspiration.

Others turned to favorite moments in Potter history.

And others still looked to Rickman's own sense of humor.