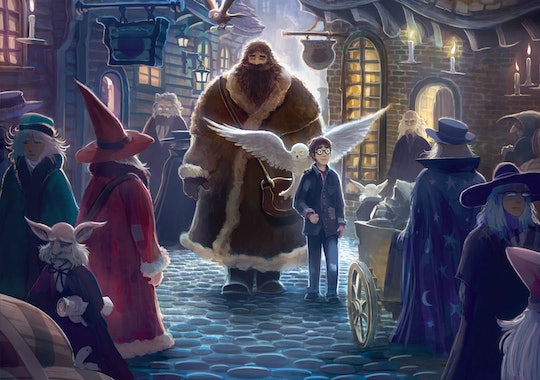 'Harry Potter' Helped Me Come Out To My Mom

I had never really kept a secret from my mom before. I was too boring to have secrets. I know most adolescent hellions spend their time between the ages of 12 and 18 sneaking around, talking back, slamming doors, and making out in other people’s cars, but I was one of those “hangs out at the bookstore making lists of books she’ll buy when she’s rich” types, so I mostly stayed out of trouble. I guess there was the occasional bad grade I just wouldn’t mention or the (even more occasional) terrible beer I would sip gingerly in the basements of friends who were cooler than me. But for the most part, I just didn’t have any major secrets worth keeping.

Until I started dating a woman, that is.

Don’t get me wrong — my mom and I have always been close. When I was a kid, we planted gardens, we played Scrabble, and we read books together nightly. She knew which friends I was currently on the outs with, she knew which foods I abruptly decided I liked or didn’t like (hating mustard was so last week, Dad; keep up), and she knew my favorite fictional character was Hermione.

The trend continued as I got older. She knew what kind of wine I enjoyed (anything white), which brand of jeans I thought made my legs look weird (American Rag), and what kind of Girl Scout cookies she should ask her coworker to put me down for (three boxes of Thin Mints).

In fact, as the years went on, it felt like the only thing she didn’t know about me was that I had a girlfriend.

In retrospect, the fact that I was bisexual was something I should have realized long before I did. (My favorite movies were A League of Their Own and Bend It Like Beckham, for God’s sake. I had to write an essay on a book of my choice in tenth grade and the book I chose was The Price of Salt.) As it was, I didn’t figure it out until college. Having finally escaped my small, Midwestern hometown, where I’m fairly certain there were more cows than gay people, I suddenly found myself free to like whomever I liked, which is how I discovered I liked girls as well as boys. I wasn’t shocked by this information; my reaction was pretty much just, “Well, that makes sense.”

But I was terrified to tell my mom. We were close, sure, but this closeness is exactly what I was scared of losing. If I told her, I would run the risk of the two of us having a completely different relationship, and I had no clue what that relationship would look like. What if this changed the way she felt about me? What if she just didn’t get it? What if she didn’t believe bisexuality was a thing? Realistically, I knew it could be worse. I knew people whose parents had kicked them out of the house and disowned them for being gay or transgender. But I really, really loved my mom, and I hated that our relationship might become that of two people who send Christmas cards to one other and exchange polite, close-mouthed smiles at family parties. The very idea broke my heart.

This did not, however, stop me from making them, each one dumber and more arbitrary than the last. I told myself I would tell my mom I was bi when she returned from her vacation in Florida. (It was just bad timing.) I would tell her when the election was over. (Did any of us really need extra things to stress out about?) I would tell her when they finished remodeling the upstairs bathroom. (I can’t remember my reasoning on this one, but it was probably something along the lines of “How is she supposed to handle having a bisexual daughter as well as a half-finished bathroom covered in exposed drywall?”)

And the longer I waited, the harder it got. Every day I felt like I was teetering on the edge of a precipice. Once I took the leap, I knew there was no going back.

Eventually, I did take the leap. But how? And why? Two words: Harry Potter.

My mom barely knew what a Hufflepuff was or how Quidditch was played, but she knew I considered myself a Ravenclaw, and she knew how I felt about Snape.

When I was 7, I started reading Harry Potter, and it was the beginning of a decades-long obsession. My mother was all about it. She had very little interest in the series herself, but she dutifully waited in line at midnight release parties for me when I was 8, took me to see the films when I was 9, and read the books to me once while I was recovering from surgery and too drugged-up to do it myself. (She then read the same passages to me again later so that I would remember them this time.)

She barely knew what a Hufflepuff was or how Quidditch was played, but she knew I considered myself a Ravenclaw, and she knew how I felt about Snape. When I was 18, I got a job with an online publication writing about Harry Potter, and she read every single piece even though she didn’t understand a word. When I graduated, we went to the Wizarding World of Harry Potter at Universal Studios together. We dined at the Leaky Cauldron, ate half our weight in Chocolate Frogs, and went on all the rides twice.

A good parent, I believe, is someone who takes an interest in their children’s hobbies, even the ones that are super embarrassing because suddenly you’re at the grocery store and your weirdo kid is in the cereal aisle wearing a wizard’s cloak and brandishing a light-up wand.

And the reason I took us on this anecdotal detour is because I eventually realized she might not totally get my sexuality… and that’s OK. There are lots of things about me she doesn’t totally get. When I was 6, I got this idea that I should be wearing two different colored socks at all times, so she bought me ones with crazy patterns that I could mix and match. When I was 10, I was really into dinosaurs, so she took me to museums. And from the ages of 7 through 25, which is the age I am now, I was obsessed with a book about wizards and magic, so she did everything she could to let me know she was on board even though she didn’t really know or care what a hippogriff was.

She tried is what I’m saying. She always tries. A good parent, I believe, is someone who takes an interest in their children’s hobbies, even the ones that are super embarrassing because suddenly you’re at the grocery store and your weirdo kid is in the cereal aisle wearing a wizard’s cloak and brandishing a light-up wand. (If you have to ask if I was ever that kid, you haven’t been paying attention.) By that metric, my mom is the best parent that ever there was.

So with this in mind, I told her. I was afraid of what my relationship with my mom would look like after I came out. I imagined the worst. But I didn’t stop to consider that it might be even better.

The only problem now is that when my mom, my girlfriend, and I get together to drink wine and play Scrabble, my mom and I play to win in a needlessly combative battle for Scrabble supremacy. (This wasn’t a side of me I ever wanted my girlfriend to see, but if there’s one thing I’ve learned, it’s that the truth will set you free.)