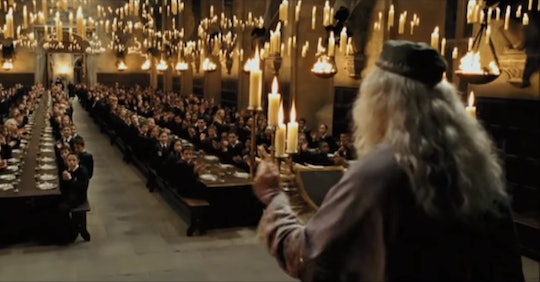 If you've spent the last 16 years resenting your parents for raising you as a Muggle, you're in luck. Harry Potter is releasing a mobile game that will finally let fans fulfill their dreams of attending Hogwarts School of Witchcraft and Wizardry, attending all the classes, gaining all the skills, and experiencing all the adventures that entails. According to Polygon, "Harry Potter: Hogwarts Mystery" is a role-playing game that will allow players to create their own avatar, rather than playing as an existing character, a first for the Harry Potter franchise. The game was first announced in December, and on Thursday, fans finally got their first look via a teaser trailer.

Players will start off by choosing a pet to bring to school and being sorted into one of Hogwarts' four houses (no word on whether the Sorting Hat will take students' wishes into consideration, as it did with Harry "Not Slytherin, Not Slytherin" Potter). Wizards in training will then get to live out their fantasies of attending classes, learning spells, making potions, and even developing relationships with other students — both friends and enemies — which could even lead to duels. The decisions players make will affect not only their story arc, but the way that other characters interact with them. Missions and quests both big and small will overlap during students' time at the wizarding school.

"Hogwarts Mystery" is the second development by Portkey Games, a division of Warner Bros. Interactive Entertainment that was announced in November. The label will produce several Harry Potter mobile and console video games, including the previously announced "Harry Potter: Wizards Unite," an augmented-reality game being developed by Niantic Labs, the creators of "Pokemon Go." "Hogwarts Mystery" is being developed by mobile game studio Jam City, a company that was best known for "Cookie Jam" until now.

Jam City President and COO Josh Yguado told VentureBeat that the company has been working on "Hogwarts Mystery" for two years, and promised fans "a very different experience" from previous Harry Potter games. "This is a labor of love. We have spared no expense. Harry Potter fans have a high bar. We wanted to get this one right." Harry Potter fans who don't consider themselves to be gamers don't need to worry, either. Yguado said that "Hogwarts Mystery" is "much more story-driven and RPG-like," rather than a "twitch game," a term used to refer to fast-paced action game that requires quick reflexes. The idea for the game came from a Jam City focus group of serious Potter fans, and the company hired skilled writers to flesh it out.

Players will attend classes such as Defense Against the Dark Arts, and Potions, and there will be quite a few familiar faces roaming the halls, such as Professors Dumbledore, McGonagall, Snape, and Keeper of Keys and Grounds Rubeus Hagrid. But don't expect to study Transfiguration with Harry; the game will take place in the mid-1980s, before Harry attended Hogwarts. Fans will recognize some students, however; Pottermore teased Bill Weasley and Nymphadora Tonks as possible classmates.

According to Variety, the free-to-play game will be released sometime in the spring, and more information will be coming out next week, when "Hogwarts Mystery" gets its big introduction at Universal Studios Orlando's annual Celebration of Harry Potter event Jan. 26-28. Jam City developers will host two panels, and attendees will get a chance to play game demos and even bring home some swag. Five of the films' actors will also appear: Natalia Tena (Tonks), Stanislav Yanevski (Viktor Krum), Bonnie Wright (Ginny Weasley), and James and Oliver Phelps (Fred and George Weasley). If you can't make it, don't despair; soon enough you'll be able to visit the wizarding world without ever leaving your couch.

More Like This
Exclusive: Three Siblings With Super Powers Protect National Parks In Spirit Rangers
Kate Middleton Has A Nice Theory About The Rainbow Sightings After The Queen's Death
Chrissy Teigen Says Her Pregnancy Cravings Are "Comical At This Point"
15 Awesome Movies For Families To Watch During Hispanic Heritage Month